In this, the second instalment of our “Running a Dark Fantasy TTRPG” blog series, we’ll explore how to capture and maintain what makes dark fantasy such an alluring genre to inhabit – atmosphere.

If settling on dark fantasy as the genre for your 5e campaign is the first step to defining the gaming experience you want to have, and safety tools serve as the second by delineating what terrible things may not (and therefore may) occur in your game, then conveying the atmosphere comes next. Atmosphere determines how your game feels.

A consistent and ever-present atmosphere is an alchemical treasure capable of transmuting campaign sessions into memorable experiences. In dark fantasy stories, it raises goosebumps, widens eyes, evokes cries of triumph, and summons the silence of shock and despair. Atmosphere brings your campaign to life.

There are three components to achieving truly atmospheric gameplay: defining it, communicating it, and making it real. The easiest way to define how you want your game to feel is by referencing (read, stealing** from) media that captures what you’re aiming for. It’s likely you’ll find inspiration in several sources, so communicating with your own deliberate language and tone creates consistency. Finally, you can give weight to your words by using appropriate assets.

This whole process begins with some respectful theft, so I think we should execute a “dark fantasy atmosphere heist”.

** Clarification here is necessary in the way that warning labels on chainsaws to “not hold wrong end” are necessary: please don’t actually commit crimes. Check licenses (creative commons is your friend), attribute appropriately, and do not do the piracy. To the greatest possible extent of your means, pay artists. Otherwise, go forth unto the public domain. 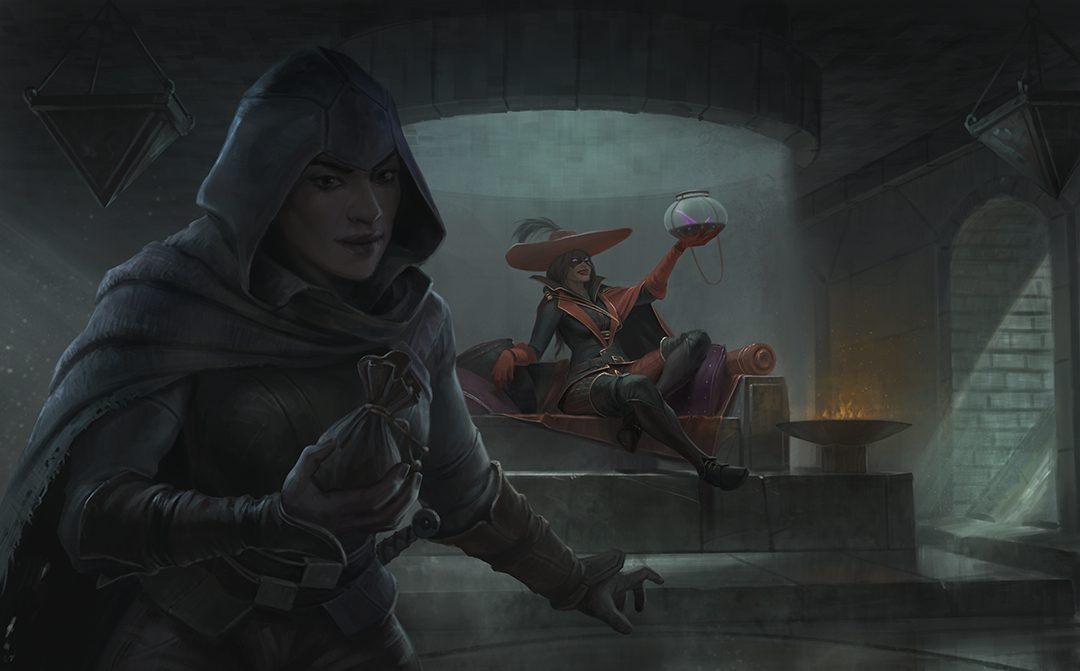 Okay friends, here’s the deal: pure originality is a fallacy. Our creative endeavors are naught but a gently simmering stew of found and foraged experiences, ingredients plucked from beloved trees planted by those who came before. So, let’s get to thieving (with love).

First, the media you pilfer from helps define fantasy the same way safety tools define dark. Terms like ‘low fantasy’ and ‘high fantasy’ are useful, but every person at your table might have a different idea about what that actually means. While some settings, like Grim Hollow, provide an excellent starting point by detailing how magic is perceived – fear and wonder in the case of Grim Hollow’s Etharis – you still have a lot to cover. Instead of wading into the dank bog of rules and regulations, the known home of many a troll, it’s far simpler and more effective to say “it’s like this”.

Media thievery isn’t just a GM exercise, either. During Session 0 it’s important to find out what dark fantasy stories your players want to wreak havoc in and why. You may have a vision of a high-fantasy dark fairy tale but discover your players will be more engaged in something grittier.

So: a world in which catastrophe has not just let the dark in but let it win, pulpy larger-than-life encounters to introduce levity and prevent the game from being a depressing doom-fest, compelling NPCs with stories of their own who feel more than a little familiar, permeated throughout by choral chants, rising drums, and whispers in the mind.

Now that’s something a GM can work with. By collaboratively identifying what kind of dark fantasy stories your game should feel like, the campaign starts from a place of enthusiasm and excitement for what’s to come.

You can steal worldbuilding, characters, traps, plot points, and anything else that tickles your fancy. And, by the way, theft is temporary: once the glorious haul from your larcenous efforts simmers down in the stew that is you, it becomes something entirely your own. 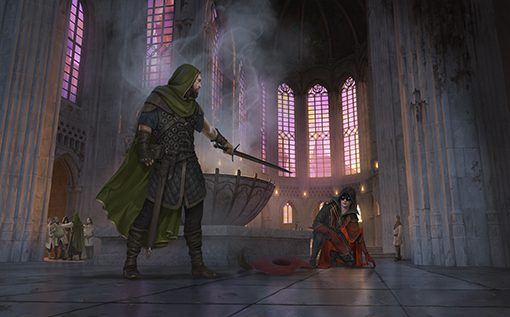 The Plan: Language and Tone

The stories that inspire you are more than pinchable characters and pilfered plot points. They’re also where you’ll find the kind of words to use when you’re GMing something as reliant on “the vibe” as dark fantasy.

For the vast majority of a 5e campaign, words will be the primary – sometimes only – tool you have to create an evocative, engaging atmosphere. The GM has to describe pretty much everything, so knowing your dark fantasy language and tone acts as an atmosphere blueprint with all the secret tunnels highlighted.

Take a really close look at your sources of inspiration and ask yourself:

Does it leverage metaphor, patiently cultivating verdant growths replete with glasshouse words, iron overgrown with vines that burst dark blooms against a world determined to corrupt each photosynthesized triumph into stinking rot? Or is this a brutal place, where every word has a job and blunt descriptions serve better than bloody poetry?

Consider whether the story you want to tell best suits:

Apply this style to descriptions of your world and all its inhabitants to cultivate an atmosphere permeating every shadowy corner of the campaign.

Familiarity with your language and tone blueprint makes it easier to spontaneously create descriptions that feel prepared, even though they aren’t. This is particularly useful when your players have pledged their souls to chaos and carry out profane worship with unbridled enthusiasm. Your schemes lie in tatters, but the game must go on and what a stroke of magnificent luck – you have a stash of deftly stolen plot points perfect for moments like this and all the right words to bring one to life.

Tip: To make something really stand out, like a key NPC or a vital piece of information, you can grab your players’ attention to focus on the outstanding element of your campaign by simply flipping your language and tone upside down. 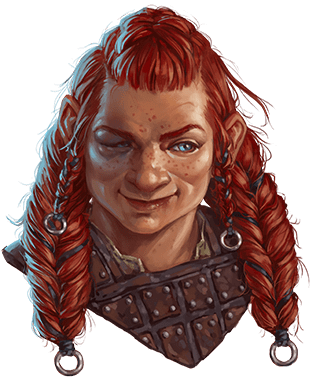 A strong team of assets frees your campaign from the prison of intangibility, bridging the gap between dark fantasy as a concept and your players’ physical realities to make roleplay – inherent to 5e campaigns – far less intimidating.

Adopting a consistent and appropriate style for NPC portraits, environment references, equipment handouts, maps, tokens, and so on is a shortcut to making your campaign feel the way it should. If you’ve described the mysterious forester as a silent, brooding soul with haunted eyes but whip out a pastel-hued anime character for reference, your players will be jettisoned away from your intent and will treat the NPC accordingly. Visual assets that look wildly different to the majority will feel similarly out of place, so aim to source art with some consistency in medium, style, or palette. When using published material like Grim Hollow this work is done for you, and beautifully so!

A faint hint of smoke and leather in the air, low lights throwing outsize shadows, and what was that sound beneath the tavern chatter – surely it can’t have been a scream? By far the easiest way to build ambience is by simply making a playlist and referencing the media whose pockets you raided at the beginning.

Some apps and software go further, with purpose-built ambience for dungeons, forests, or a haunted house where a child laughs faintly at random intervals (the first player to pick up on that is in for a good time). Lighting works remarkably well too – a lamp with a glaring red bulb signifies a pretty grim existence, although for in-person games you may need more illumination to see your rolls! If you are playing in-person, scented candles are a subtle way to communicate location and sensation.

Item handouts may have the strongest effort-to-impact ratio on this list. Relatively fast to make in a word processor or design program using templates, it almost feels too easy when you produce (with a flourish, of course) an actual wanted notice featuring none other than the party themselves. A long-dead flower folded into a sketch of a lost loved one, a dire contract signed in blood, a cryptic letter in the royal spymaster’s code…You can put it all on the table, literally. Playing remotely? Chuck a handout in the old snail mail and prepare for unbridled delight.

In my 5e games I prefer to distribute initiative to whoever posted the best meme in chat during the session, which is not very dark fantasy of me but is nonetheless a practice I highly recommend. But sometimes players can forget they have initiative, among other important bits and bobs which rely on taking notes during often-tense gameplay. Initiative tokens, replicas of important campaign items, and coins to represent treasure or currency ground the game in a tactile way that makes everything feel more real and easier to grasp. If “official” props are out of reach, remember that as the GM nothing is true until you say it. You don’t need permission to change anything in the game world, from what’s used as currency to the treasure sought by a denticle kleptomaniac granny (remember her?) who covetously stalks the party. Have a poke around your local flea market or online for interesting ephemera like antique keys, weird jeweler, and obviously haunted paintings. 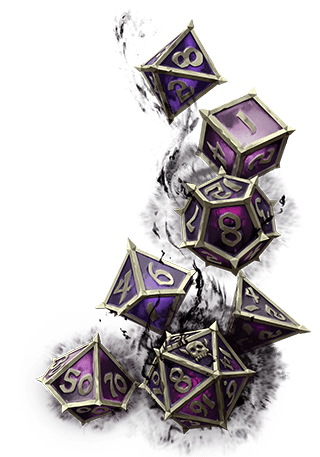 5e is a dicey game and no that’s not a pun. The prevalence of outcome via polyhedral punt is another opportunity to bring your campaign atmosphere to life. A dark fantasy dice palette features blacks, greys, and rich jeweled tones like blood red, lush green, and burnished gold. If you get stuck, go back to your influential media (stealin’ stash!) and see what shades show up there. Thematic dice used exclusively for homebrew rules like Grim Hollow’s Beast and Resolve dice pools, grievous wounds, or variant concentration checks also ups the drama by making these unique and deadly mechanics stand out. “But Alex!” You cry, “We’re playing online and I’m worried about players fudging rolls!” To which I lean close and reply: “Trust your players, they trust you. Embrace the math rocks.”

Dressing up for a TTRPG isn’t going to be for everyone, but you don’t have to go feral in a costume shop to make an impact (although that is very fun). A single relevant item of clothing like a refined gentleman’s coat, a key accessory like a dragon pendant, or a general theme like only wearing red during games acts as a declaration of who you are while you’re GMing and what the players can expect from this character.

The GM character is the last atmosphere curio to join our collection, so all that’s left to do is salt the sills and doorways just in case and put it all to work.

By now you might suspect the truth about those alchemical properties of campaign atmosphere:

Every individual at a TTRPG table plays a character, including the GM. NPCs, of course, friends and foes alike, but if we were waxing existential we’d declare the GM also inhabits the character of dark fantasy itself. Which sounds grandiose, overwhelming, impossible… except you’ve just acquired one hell of a cheat sheet. Everything you know about how your world feels – from its visual traits to the way you talk about it and where your inspiration comes from – is part of the GM character.

Inhabiting this character means atmosphere becomes a natural part of everything you do to guide your party of inevitable miscreants down the dark fantasy path, freeing up that juicy brain for more appetizing tasks like math.