There is much to see in Nov Ostoya and getting lost is common among newcomers to the city. Getting lost is also the reason that newcomers tend not to last long in the capital of the Ostoyan Empire. Turning down the wrong street can bring one face to face with either thieves, thugs, or the fangs of a thirsty vampire.

Those who arrive in Nov Ostoya during Fables: Citadel of the Unseen Sun must get the lay of the land quickly. Or else they may be consumed by the streets they are exploring—sometimes literally.

Exploring Nov Ostoya does have its benefits, however. The city is a bastion of civilization and politics, and with those descriptors comes the possibility of intrigue. The people of Nov Ostoya have stories to tell, some of which may assist traveling adventurers in navigating the bloody streets of the vampire-ruled harbor city. 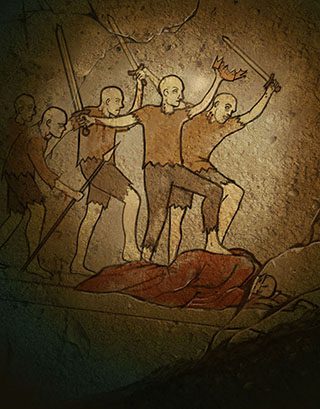 Life in Low Streets is not easy, and many find themselves wishing for an existence differing from the one they are currently trapped within. In an attempt to claim some semblance of control over their life, some folks join one of the gangs who rule the poverty-stricken region of the city.

With the Crownbreakers, commoners find a way to channel their hatred for the vampiric aristocracy into fear-based control over Low Streets. The Crownbreakers despise the undead nobles and everything they stand for, and yet rule their charges with no less brutal violence.

Opposite that, members of the Volitant are accepting that the vampiric nobility are part of Nov Ostoyan life. They position themselves as useful tools for the aristocracy rather than struggling to oppose them. The Volitant hope that by maintaining a symbiotic relationship with the rulers of the city, they themselves may gain power.

There are also folks who refuse to join either side of the conflict. Nov Ostoya doesn’t have many people who would fight for change, simply because idealism tends to be snuffed out quickly in a city where the sun never shines. But the few who dream of a better life have found ways to unite, secretly.

“Sometimes folks come through these parts of Low Streets with grand ideas about changing things for the better. They are almost always young, and stupid. Such people rarely last longer than a red hour or two before they are drained of either blood or coin in an alley somewhere.

But I can’t stop such folks from wanting change. Accepting an unfair lot can be as hard as living it, that’s what my dad always told me. Though he’s dead now, so I should do better than listening to him.

Obviously, you didn’t hear this from me, but there are others who are displeased with how things are done in Low Streets. Don’t get me wrong, the Volitant and the Crownbreakers help keep the worst of the topsiders at bay, but they’re not the only ones recruiting.

If you fancy yourself a revolutionary, you should head to Harper’s Gracious Goods. Say you got silver for sale, at a hearty price. You’ll be given something to do at least. Something that isn’t drinking away your last bloodied coppers for watered down ale in a Crownbreaker filth hole.”

City Passes, and Rumors of a Low Street Mark

The exits out of Nov Ostoya are limited. The main way Nov Ostoyans make it out of the city is as either a bloated, bloodied, or drained corpse, depending on the method of execution. Drownings in the harbor are common, as are deaths to beasts in the dark, or vampiric nobles from the Heights.

With a high demand for means of exiting the city, it only makes sense that an entrepreneur would rise to the occasion. Though authentic city passes are nigh impossible to come by for the average person, a fake one is easily available after enough coin has been handed over.

“I heard that Madam Frenkle or whatever her name is can help you get out from these bloody walls. You know, that little halfing witchling with the legalities shop by the Warrens and High Street?

Come on, you don’t really think she’s making a profit off that testament business she’s advertising? People have hardly anything to their name as is and I guarantee, ‘friends and family’ be the first to take coins from their fellows’ pockets when they croak. Doesn’t matter what a testament says. In Low Streets it’s first come, first for the coin purse.

Still, it’s odd, isn’t it? How that Madam Frenkle always struts about in fine fabrics for stiffing Low Street faithful. Meanwhile, the rest of us play content with scarred necks from donations. Besides, without draining yourself dry for the fangs up high, you’d never be able to afford her passes. They’re pricier than a gallon of elf blood at the Indenture Stills.

I reckon that Frenkle has a nifty stash hidden away in that shop of hers and she doesn’t look like the type that can take a punch. That’s one of the good things about frail, old ladies. Their bones snap so easily, you know.” 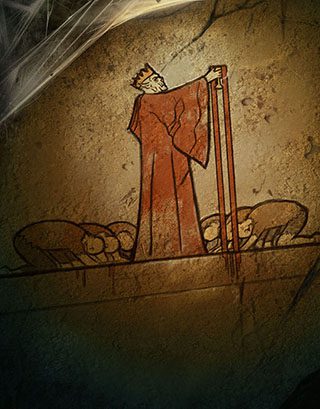 Levity can be found in even the darkest of places. Nov Ostoya is no exception. Gallows humor is ever-present wherever death and sorrow go hand in hand; especially when alcohol or other intoxicants are involved to loosen one’s sense of humor.

A Soma staple is the famous game of Bed, Wed, Butcher, which has variations across the world. Though, in politically charged places such as Nov Ostoya, the targets of this game may be considered too risky to make light of, even in a drunken tavern.

“Let’s play a game, shall we? Bed, Wed, Butcher—the members of the Crimson Court. Come on now, don’t be so dramatic. They hear well, but I doubt a deaf man would be able to hear himself think with how loud this place is.

Oh, why do you insist on being humorless sods? Fine. I’ll just give you my thoughts on the matter. If my throat gets pierced for ruffling the Court’s petticoats, so be it.

Yes, I know there are seven members so one will have to be skipped, don’t make me out as a twit. We’ll just ignore the Grand Duke. Koshevek smooth-talked, clawed, and gutted his way to the head of the table, so I suppose it’s wise enough we keep him out of the game.

For Wed, I have to go with the Machioness and the Baron. Marchioness Iulia is always off dealing with ships and such, and that would leave me alone at home. A preference in this case, if you ask me. As for the Baron Mihael, knowing construction is a good trait in a partner. I’ll be in a comfortable house while he’s draining me to a husk. Besides, both of them deal more with mortals than the other Court members combined, meaning I’m more likely to be a pretty conversation starter than an entrée. And a man like Mihael ‘The Wolf’ must have some bedroom tricks up his sleeve too.

It is not cheating to take that into account for Wed! Being hundreds of years old must have given them plenty of practice, and if I’m agreeing to a marriage with a vamp I want all the benefits, as few as they may be.

But since you want to hear my real thoughts on the Bed part of the game, Countess Katalina is the obvious choice. Have you seen her? She’s stunning enough that I forget her dietary preferences. Only thing is, she would never let me win an argument and she would somehow know everything I’ve ever done wrong in my life. Not marriage-material.

I guess Viscount Grigore would be my other one for Bed… An analytical mind like his would probably see the whole deal as more of an experiment than anything else, but if I’m the one being experimented on, I don’t mind at all. I do think he wouldn’t pay much attention to me, which is a definite deal breaker. Again, not marriage material.

That leaves Countess Augustine for Butcher, which… come on. Anyone who goes by the nickname “Sommelier” and has a diet consisting of other people’s lives is an automatic no from me. In all situations, I would be constantly aware that they’re thinking about different ways to eat me.

Who does that leave? Oh right, Viscountess Virgilia. I always forget about her. Yeah, she’s too dull for me. Historians are too old fashioned in my opinion. I’m giving her the Butcher treatment on my expectation for boredom alone. When I’m with a vamp, I want to be either terrified or turned on, not bored half to death listening to stories about ancient Soma history.”