With winter in the air, there are plenty of mythologies around the world from which to draw adventure ideas. Among them, the Wild Hunt is featured in the folklore of various northern European cultures. The hunters are generally the souls of the dead represented by ghostly warriors and their dogs. Sometimes they are fairies, Valkyries, or elves.

This spectral, nocturnal horde is said to presage misfortune such as pestilence, death, or war.

They sweep through the forests in midwinter, during the coldest, darkest part of the year. While ferocious winds howl over the lands, these midnight riders, gallop furiously through the skies on pale horses, led by the Host.

Let’s look at ways to take existing stat blocks to spice them up with some surprises and quickly add an encounter to your campaign or a one-shot.

The Wild Hunt consists of a hunting party of ghosts and hellhounds who stalk the winter night. It is led by a figure called the Host who rides an eight-legged white horse accompanied by two black ravens. Because they represent dark days ahead, they should be part of a high tier adventure. Here are some example hooks for your players.

Rumors abound that the Wild Hunt is approaching, and the rulers of the area have hired the band of heroes to stop their incursion into these lands.

People encountering the Wild Hunt have been abducted and the adventuring party must venture to the underworld or the fairy kingdom to rescue them.

A distraught father believes his son has joined the Wild Hunt and asks the adventuring party to bring him back.

There are many myths to choose from in relation to The Wild Hunt, but let’s focus on winter-themed ones for these monsters. We’ll look at altering existing monster stat blocks to represent The Host and its Demon Horse, as well as various minions. For all these creatures, change their Damage Immunities to cold and necrotic.

To start, in tales related to Woden as the Host of the hunt, the ravens Huginn and Muninn play a role. For purposes of a game, these two corvids could be more useful as spies than fighters. Use the raven stat block but consider giving them some extra abilities.

Magic Resistance. The ravens have advantage on saving throws against spells and other magical effects.

You could alternatively make Huginn and Muninn each a rabenhex from Grim Hollow: The Monster Grimoire, allowing the Host to benefit from their Hex ability. This could lead to a more challenging combat encounter with the Wild Hunt.

The Host leads hunters on horseback along with pack of white-bodied and red-eared dogs of hell. For the hunters, use the specter stat block and bump it up to a CR 3 since we’ll be adding some abilities.

Etherealness. The hunter enters the Ethereal Plane from the Material Plane, or vice versa. It is visible on the Material Plane while it is in the Border Ethereal, and vice versa, yet it can’t affect or be affected by anything on the other plane. This ability extends to any creature the hunter is riding.

It is said that to look upon the riders is an omen of death, so add the following as one of their actions.

Dreadful Glare. The hunter targets one creature it can see within 60 feet of it. If the target can see the hunter, it must succeed on a DC 10 Wisdom saving throw against this magic or become frightened until the end of the hunter’s next turn. If the target fails the saving throw by 5 or more, it is also paralyzed for the same duration. A target that succeeds on the saving throw is immune to the Dreadful Glare of all hunters (but not the Host) for the next 24 hours.

For the Wild Hunt to work thematically, there should also be ghostly warhorses. Use the warhorse stat block but we’ll give them a flying speed of 60 ft. Additionally, to make them spectral equines, include the following.

Incorporeal Movement. The warhorse can move through other creatures and objects as if they were difficult terrain. It takes 5 (1d10) force damage if it ends its turn inside an object.

Sunlight Sensitivity. While in sunlight, the warhorse has disadvantage on attack rolls, as well as on Wisdom (Perception) checks that rely on sight.

Ghost mustangs from inside the Monster Grimoire could also be used as the hunters’ mounts, with the above changes included. This would of course increase the challenge of encountering the Wild Hunt.

To represent the dogs of the hunt, use the hell hound but make it ice-themed by ensuring their Bite attack does cold damage. For a surprise, also add the following.

Ice Breath (Recharge 5–6). The hound exhales fire in a 15-foot cone. Each creature in that area must make a DC 12 Dexterity saving throw, taking 21 (6d6) cold damage on a failed save, or half as much damage on a successful one.

The Host & The Demon Horse

Depicted as a wild huntsman riding a demon horse who hunts souls at night, the Host has different names depending on folklore, but it often associated with Woden. Try using the mummy lord stat block to start but making some alterations to add both surprise and thematic appropriateness.

Make the following changes to its Spellcasting ability.

Spellcasting. The Host is a 10th-level spellcaster. Its spellcasting ability is Wisdom (spell save DC 17, +9 to hit with spell attacks). The Host has the following warlock spells prepared:

As a warrior, it makes sense to give the Host a weapon attack that replaces Rotting Fist.

Next, since the Wild Hunt is comprised of riders the Host should have the ability to create more when needed. Add the following action.

Create Specter. The Host targets a humanoid within 10 feet of it that has been dead for no longer than 1 minute and died violently. The target’s spirit rises as a specter in the space of its corpse or in the nearest unoccupied space. The specter is under the Host’s control. The Host can have no more than seven specters under its control at one time.

Finally, replace a couple of its Legendary Actions to be more winter-themed. Replace Blinding Dust with Ice Gust, and Whirlwind of Sand with Snow Squall.

Ice Gust. Ice particles swirls magically around the Host. Each creature within 5 feet of the Host must succeed on a DC 16 Constitution saving throw or be blinded until the end of the creature’s next turn.

Snow Squall (Costs 2 Actions). The Host magically transforms into a snow squall, moves up to 60 feet, and reverts to its normal form. While in snow squall form, the Host is immune to all damage, and it can’t be grappled, petrified, knocked prone, restrained, or stunned. Equipment worn or carried by the Host remain in its possession.

The demon horse that the Host rides is often described as eight-legged and in some cases named Sleipnir. Use the young white dragon stat block as a base but give it the following abilities.

Ethereal Jaunt. As a bonus action, the horse can magically shift from the Material Plane to the Ethereal Plane, or vice versa.

Trampling Charge. If the horse moves at least 20 feet straight toward a creature and then hits it with a hooves attack on the same turn, that target must succeed on a DC 18 Strength saving throw or be knocked prone. If the target is prone, the horse can make one hooves attack against it as a bonus action.

Finally, replace its Bite and Claw attacks with Hooves. It can make this attack twice using Multiattack. 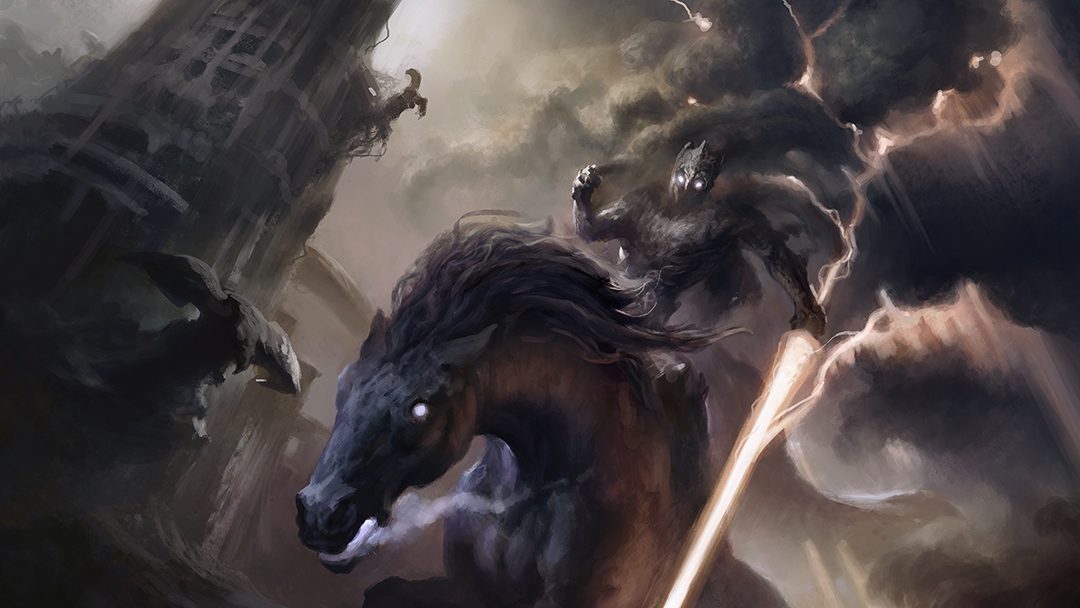 No high tier adventure would be complete without some sweet loot drop. Here are a few ideas to get you started.

This wooden trunk measures 12 inches long, 6 inches wide, and 6 inches deep. It weighs 5 pounds, regardless of its contents. You can use a bonus action to speak the command word that expands the box to a full-size trunk of 4 feet tall, 2 feet wide and 4 feet deep. The trunk can hold up to 500 pounds, not exceeding a volume of 64 cubic feet. Retrieving an item from the bag requires an action.

When the trunk is first opened, it contains the horseshoes of a Zephyr. Additionally, while in possession of the tack trunk, you gain the following benefits:

Placing the tack trunk inside an extradimensional space created by a handy haversack, portable hole, or similar item instantly destroys both items and opens a gate to the Astral Plane. The gate originates where the one item was placed inside the other. Any creature within 10 feet of the gate is sucked through it to a random location on the Astral Plane. The gate then closes. The gate is one-way only and can’t be reopened.

Riding Crop of the Wild Hunt

This riding crop is carved from bone. It has 6 charges and regains 1d6 charges daily at dawn. While in possession of the riding crop, you can use an action to expend 1 of its charges to magically transform into a snow squall, transport yourself and anything you are wearing or carrying to a location within 60 feet, and revert to your true form. While in snow squall form, you are immune to all damage, and can’t be grappled, petrified, knocked prone, restrained, or stunned.