Welcome back to this blog series on how Classical mythology can offer guidance to our TTRPG encounter design! So far, we’ve talked about the power in conforming to or defying ancient narrative conventions, and how we can make combat more dynamic by following the example of Hercules’ battle with the Hydra.

This time we’re talking about something a little bit more nebulous and trickier to pin down – clashing with the bad guys without actually fighting.

Of course, we all know that combat isn’t the only way to handle conflict in 5th Edition. Such versatility in play is something that sets Tabletop Roleplaying apart from a video game like Halo or a board game like Monopoly; in those games, violence is the only path*.

However, when so much of a TTRPG character sheet is dedicated to what spells you can sling, how much damage you can soak, and how hard you can swing a sword; combat can understandably become players’ instinctive response.

The danger of such a ‘to the death’ mentality is that it can potentially sap out all the variety and tension from the encounter because the stakes are often the same across different fights – try not to die. We want to try and bring the tension back.

Today we’re going to look at a famous example of a non-combat monster encounter from Greek myth – Oedipus and the riddle of the Sphinx – and see what wisdom we can take and apply to running a 5e game.

*I know you’re meant to negotiate in Monopoly, this was a joke.

The Riddle of the Sphinx

Way back when, the people of Thebes had really ticked off the Olympian gods. The stories attempting to explain the crime of the Thebans vary, but what is consistent is the punishment; a monster was sent to terrorize the city. The monster had the body of a huge and powerful lion, razor sharp claws, the head of a human woman and, from its back, unfurled a pair of glorious wings. She was the Sphinx. The Sphinx settled down along the road leading to and from the city gates, just waiting for unsuspecting victims to happen across her path. She could, and frequently did, kill any strong youth who tried to face her in battle. So many lives were lost to the beast that the cliff top she kept as a perch was littered with blood and bones and her fur was matted with gore.

So, straight up attempting to kill the monster wasn’t working out. But as fate would have it, the Sphinx had a weakness! Long ago, she had learnt a riddle from the nine muses; if any would-be victim of the Sphinx asked to hear her riddle, she was bound to let them try to answer it. Anyone who couldn’t provide the solution must submit to being devoured, slowly and painfully. But. If any were to correctly answer the riddle, they would be allowed to pass unharmed, while the Sphinx would perish in shame.

It was declared whoever was able to solve the riddle of the Sphinx would be given the crown and made ruler of Thebes. Many tried. Many were slaughtered. The Sphinx continued to plague the city.

Then came Oedipus. Unlike most other heroes from Greek mythology, Oedipus wasn’t especially physically adept. As an infant, he’d been abandoned on a mountainside to die of exposure, but first a spike was driven through his tiny baby feet, pinning them together. Y’know, just to really skew the odds of survival against him. So, when Oedipus was accosted by the Sphinx as he travelled the road to Thebes, it’s unsurprising that he asked to hear her riddle instead of trying to fight her. She growled and gnashed her teeth, but acquiesced and posed her riddle:

“There is a being on earth that is four-footed, two-footed, and three-footed, yet has only a single voice. What is it?”

Oedipus pondered this for a moment, poking the dirt with the staff he used to help him walk, as anyone might do when deep in thought. Then an idea was sparked… A walking stick…

“The answer is man.”

Oedipus had realized that human beings change how they walk as they age; in infancy they crawl on all fours, as they mature they learn to walk on two feet, and in old age when they grow weaker they use a cane as a third foot to steady themselves. The answer proved correct and the Sphinx, in despair at having been bested in this game of wits, threw herself over the cliff edge to her doom. Thebes was free of her tyranny, and Oedipus was made king.

(Let’s not talk about what happened after that.)

When we play combat-heavy TTRPGs there’s a simple question that frequently arises; “Is this going to turn into a fight?” Players’ spidey-senses start tingling and they try to react before the game master can call for initiative – try to place themselves in a stronger position before things come to blows. When the game master does call for initiative, that question is answered. “Yes. We are fighting.”

What we witness in the story of the Sphinx, and in many tales that follow in its legacy, are scenarios in which that question is left hanging. “Is this going to turn into a fight…?” Oedipus is stuck on a precipice, so close to tipping over into the territory of violent confrontation, but desperately trying to avoid it. As a result, the audience are caught there with him.

When we apply this concept to our TTRPG encounters, we can achieve a similar effect, keeping players trapped in the thrilling moment of an unanswered question.

The story of the Sphinx must undergo some adaptation to function at its best in the medium of TTRPGs. The challenge takes place because Oedipus’ life is under threat. This is perfectly legitimate storytelling, it makes sense that Oedipus doesn’t want to be torn to shreds!

Playing 5e is an unusual form of storytelling in that the audience (the players) don’t typically want to avoid fights. Quite notoriously, parties of player characters, when threatened with force, tend to respond in kind regardless of whether the odds are stacked against them. As game masters, the kind of stories we’re constructing with our players could benefit from a slightly more subtle approach to create the tension we’re looking for.

Tempt Your Players Instead of Threatening Their Characters

Riddles in the Dark, a chapter from Tolkien’s novel The Hobbit, is a famous fantasy example of a battle of wits. While lost deep inside a goblin infested mountain, Bilbo stumbles across the home of Gollum. Gollum wants to eat Bilbo, but Bilbo is armed with a sword. Bilbo could probably kill Gollum, but won’t know the way out of the mountain without Gollum’s help.

“It must have a competition with us, my precious! If precious asks, and it does not answer, we eats it, my precious. If it asks us, and we doesn’t answer, then we does what it wants, eh? We shows it the way out, yes!”

Tension is added to the scene because Gollum has something that Bilbo needs that Bilbo can’t just take by force. Nothing about their relationship has really changed – the two are still enemies, Gollum still wants to eat Bilbo, and Bilbo still might have to fight Gollum if things go sour – but the encounter has become a lot more delicate, requiring thoughtful navigation. 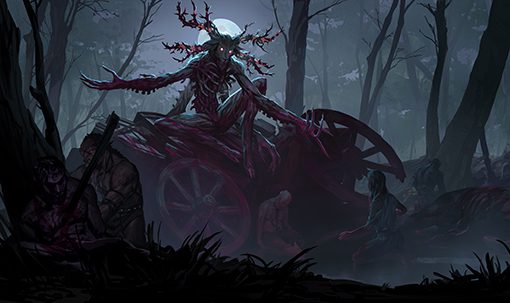 What’s great about this iteration of the trope is that it gives you a template you can use with your players. First, your villain must have some reason they can’t or don’t want to fight the heroes right now. In Gollum’s case it’s because Bilbo has a very nasty looking sword and Gollum feels threatened by that. But the complication could be any number of things in your game because, as a game master, the villain is under your control.

Maybe the villain is injured right now and has doubts about winning, or they need the heroes alive to follow to the resistance hideout, or they think teaming up with the heroes is the only way to stop some other baddie from taking over the world before they get the chance to!

The second element is a bit trickier; the heroes need to have some reason they don’t want to kill the villain right now. Notice I left the “can’t” option out of the sentence that time? Trying to back your players into a position of weakness, where they can’t fight someone, is like trying to herd hungry velociraptors. What’s worse is that it can risk making your players feel crummy, since it takes away some of their power of choice in the game.

An approach that’s both easier to accomplish and less likely to leave your players feeling powerless, is to give the villain something that the heroes want, but make sure that the heroes can’t get it from them by killing them.

A simple and broadly applicable example would be some piece of information they’re seeking; how do we stop the evil ritual? Where has the McGuffin been hidden? The heroes could decide to attack the villain at any time, it would probably even be safer and more sensible to just kill them now… but if they do, they might never know the answers to their questions.

The key to binding all this together is that both parties must want something from the other, and both parties need to have some bargaining chips. Ideally, the players should be constantly assessing the risk to reward ratio, choosing not to fight even if they really, really want to. But if the fragile balancing act does break down and initiative is called, a dead villain who held a key piece of information has some very interesting consequences of its own.

Non-Combat Conflicts Don’t Have to be Riddles

Both of our narrative examples so far, Oedipus and The Hobbit, have dealt with literal games of riddles that replace or delay combat. What we’re actually talking about is creating room for negotiation, which can take any number of shapes.

A great example crops up early in the first campaign of Critical Role! The party have been delving into the caverns of the Underdark and discovering all sorts of evil schemes involving the denizens who call it home.

By chance, they come across an exile named Clarota. Clarota clearly isn’t a good guy, but the heroes hope to use his deeper understanding of the area and its inhabitants to navigate their way through danger and solve the mystery. In turn, Clarota doesn’t like the heroes but hopes to use their strength to exact vengeance against those who exiled him.

Across several game sessions the party travels with Clarota despite a significant lack of trust between the heroes and their guide – one of the players even makes notes, over and over again, that he doesn’t trust Clarota. Finally, after weeks of anticipation, the fragile alliance shatters and turns to conflict, and the story was made all the more powerful by the wait.

Next time you’re planning an encounter with a significant baddie NPC, consider whether you can add more tension to the story by complicating things so they might not immediately turn to violence.

Maybe you’ll find it more effective to model the encounter after the story of Oedipus and the Sphinx, giving your players a more interesting choice – “Is this going to turn into a fight? Or are we going to negotiate a tenuous alliance?”