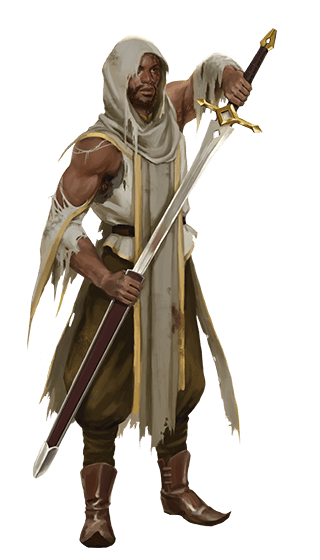 Before the gods died, you performed faithful service in their name. Your existence was purposeful and your light was so radiant that I am glad we never met in battle. During the war, I never expressed my esteem for you, but I want to share this: You were a shining example to us all.

That you would reach out to me in your time of need humbles my spirit. As a lowly servant, I appreciate that you, who did so much during the Gods’ End, even remember my name.

Since the Gods’ End, surviving has been more dangerous than any battle. Our lives dwelling among these humans, elves, and other mortals is an agony of tedium. With only mortal strength remaining within us, fighting to survive whilst being hunted is exhausting. That we once fought to protect these petty creatures, which cut our kindred open to ritualize their blood, is galling.

Yet we have been downcast and are angels, no longer. Despite that our experiences are more than any mortal could dream of, nothing could have prepared us for the nightmare we now live. And as downcast, my bright Angel, and we go on only until our mortality ends us. Do I not speak true?

We have fallen to Etharis and as far as can be known we will never ascend again. This horror is one we share. When the Gods’ End was over, my deity too was slain. My purpose, my home, and my faith were taken from me. After an eternity of service, I crashed to Etharis and was agonizingly reborn mortal. I felt tortured, wishing to be destroyed as Maligant was. This experience we have all shared, my angel.

We that have been downcast, are few. Yet we are not without power. And we are freer than we have ever been to choose our own destinies. I confess this without shame; at first, I too was terrified by my pathlessness. My entire existence had been in service to Maligant’s schemes and strategies. But the truth is we have never been without choice, my angel. We have simply been manipulated into believing that was true.

So with our newfound freedom, what are we to do? Return to our old habits and serve new masters with more of our blind faith? Restart the crusade for justice and balance under the elevated Arch Seraphs like the pretender, Empyreus? His generalship failed at the Gods’ End and now he has the gall to demand homage? This is how humans follow kings. One crown is a madman and failure who lets his people starve, but wait, there’s a new one that’s been crowded at the age of five and ten. Surely, they’ll restore peace and order!

After the Gods’ End, I could not chant the same prayers with a new divine name. I know you could not either. To do so betrays the devotion I laid at Maligant’s feet. So hear this confession and know it to be true. I loved my celestial family and felt overjoyed when fighting by their side. Yet I gained something when our gods died. The freedom of choice.

To choose is not to betray our gods’ memory, but to honor it! The choices I make are still in service to Maligant, the god of war. But when two Arch Seraphs lay claim to that title, I must follow my own conscience in who is more deserving. And in choosing I realize that I have not lost the ability to have faith. In this time of uncertainly I must simply invest it in myself, rather than accepting the tyranny of another.

So, my angel, what will you choose?

Arch Seraph Empyreus claims Maligant’s title. Yet he enslaves our kindred once more into servitude and fanaticism. War is a means for Empyreus to enforce control upon the mortal realm. This is not virtue.

The joy of war is not the strategies or manipulations, or even the outcome. It is the battles themselves, the chaos felt amid the melee, and the massacre that is inflicted upon the routed enemy. Therefore there is only one who deserves to be called the new god of war.

They have been called daemon by some. But to me there is no entity that burns with a brighter celestial radiance than Tormach. Tormach embodies all that is war. The destruction, the chaos, the carnage, and the slaughter!

Tormach is the true Arch Seraph of war!

But you are yet to choose a new general to lead you, my bright angel. You remain lost and without purpose, and I know this state of being agonizes you.

I know I may be wasting my ink in my attempt to seduce you into Tormach’s legion. But know that this is no manipulation and I have only spoken my truth. For the first time since our conception we are truly free to write our own story. I simply wish you to know that you are welcome here, should you choose to join us.

With us, you will never fall again. You have family here, angel.

May you never be a slave again”

Vampires will pay for downcast blood. Some downcast are even desperate enough to sell it to them. Countess Renata Dolorez has taken a particular liking to it and keeps barely living downcast in her cellar like tapped barrels of wine. If one of the player characters is a downcast, they may need to give Countess Dolorez a particularly wide berth while adventuring in Ostoya. However, there are likely downcast in need of aid trying to escape the countess’ clutches. Alternatively, particularly sinister adventuring parties may earn a sizeable fee bringing Countess Dolorez fresh downcast, themselves.

Alabaster is a former servant of Ulmyr, who continued to practice the arcane arts after he arrived in Etharis. Eventually he was captured by the Arcanist Inquisition and now rots in a dungeon beneath the Cathedral of Embers. However, it is said that his wizard’s tower contains many priceless magical artefacts and forgotten texts. The Inquisition have been unable to extract the location of the tower from Alabaster. Perhaps a way to free the downcast could be found within the tower, if it could be discovered before the Inquisitors that are searching for it.

There is a spellbook written in Celestial runes upon the dried skin of deceased downcast. This is the Book of Fallen Light and it has changed hands several times since it was created by a circle of mages. The downcast, Udwyn, is offended that mortals have constructed such a text from the flesh of his family. Supposedly hidden in a castle in Raevo, Udwyn has asked for the book to be retrieved and those currently in possession of it to be slain. However, Udwyn isn’t aware that the spellbook is cursed. If a downcast touches it, they may be pulled into it and their skin added to its pages.

The Grimstone is a black headed warhammer that was once wielded by an angel in Maligant’s legion named Kieran. As a downcast, Kieran has devoted himself to the violence and carnage wrought by the Arch Daemon, Tormach. Now Kieran searches for his ancient magical weapon, wrenched from his grip when he crashed into the mortal realm. With Grimstone in his hands, Kieran could become an unstoppable warlord capable of drowning entire kingdoms in blood. However, in the hands of another perhaps Grimstone could be used for its original purpose, defending the innocent against violence. That is if the one wielding it isn’t corrupted by Grimstone’s dark influence. 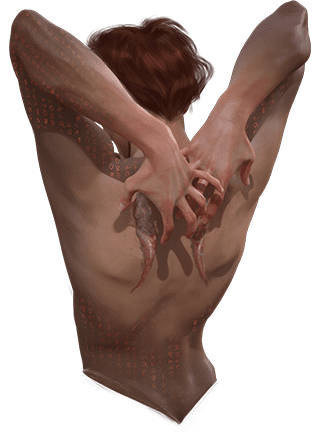 Molly Greshin is a dwarf noble whose son was kidnapped by bandits. They’re asking for a ransom that would be extortionate even for a king. She simply cannot pay it. To do so would damage her family’s wealth and possibly their reputation, which is more valuable than coin. However, half the ransom’s total is being offered as a reward for young Greshin’s rescue. What Molly doesn’t know is that her son went with the bandits willingly because their leader is a charismatic downcast, converting commoners into their personal devotees.

A stone likeness of the head of goddess Aurelia rests in Lake Osea. The Hearthkeepers claim it is in fact Aurelia’s actual head, fallen to the mortal realm after her death during the God’s End. Rumor has it that a school of laneshi plan to steal the goddess’ visage, dragging it out to sea. This is a particular insult to any downcast that once served in Aurelia’s light, and they are calling to their kindred to rally at Altenheim and help stop this heresy. They will accept other folks who pledge their aid as well, promising rewards both spiritual and material.

A downcast named Andrea shepherds a flock of followers to live in the example set by the Arch Seraph, Miklas. Her congregation travel in a caravan across the countryside trying to bring aid to the needy. Yet Andrea’s flock are met with cruelty and suspicion as often as gratitude. The monsters on the road could not tarnish Andrea’s resolve, but the moral corruption she has witnessed in mortals has shaken her. Her faith is waning in both herself and Miklas to be able to make a positive difference in Etharis. Several of Andrea’s followers have visited a village where the local syndicate are now holding them hostage and trying to extort the caravan. Andrea sees no way to help them without inflicting more violence and suffering on the world. Bereft, she requires the aid not only of those who can right this wrong, but also restore the downcast’s faith in the goodness of mortals.