I’ve been playing tabletop roleplaying games for a long, long time. I have dice older than many of the people I work with at Ghostfire Gaming. I’ve read previous editions before 5e where there were classes that were just races, and classes that could only be played by certain races, and classes with so many prerequisites the character had to be nearly superhuman (and also just human) to play them.

Over the editions, how classes work—or don’t work—have changed along with the rules. Yet through it all, classes have been the main determiner of what a character can do in the game, and who their character is in terms of being a part of the unfolding narrative story.

I thought it would be fun to look at the game, especially 5e, through the lens of what the classes mean in terms of both narrative and mechanics. I may get a little silly and flippant along the way, but it’s all done with a playful sense of love and respect for the game!

A Glance Back at Classes In Earlier Editions 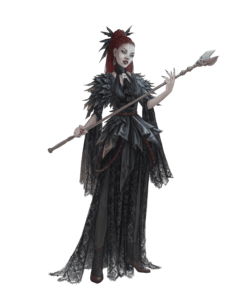 From the earliest days and first editions, the most interesting and unique classes were the ones that contained links to diverse powers that were greater than the characters. In 1st Edition, often fighters, thieves, monks, and even wizards were very similar to one another. Players creativity like descriptions and background information could introduce variety into the character, but at the mechanical level, one fighter was very much like another.

Clerics needed to worship individual gods. A cleric of Thor and a cleric of Set might be very different in their outlooks and decisions. Clerics of love deities would act in a way that would be easily distinguishable from death gods, but mechanically they all played very much the same.

In 5e, we see those differences implemented in a mechanical way as well, and they make the game a more enjoyable experience unique to each player. And it’s not only the clerics that get in on this unique flavor!

Warlocks – Edge Lords of the Realms

The ironic thing about warlocks is that while they generally come across as the dour rebels and anarchists of the D&D world, they’re technically just as beholden to their patrons as clerics are to their deities.

Whenever a warlock acts all edgy and mysterious, I generally chuckle and say, “Are you sure your mommy or daddy want you to do that?” Granted, in this case “mommy” might be a daemon lord or “daddy” might be a formless eldritch horror, but the connection a warlock has to an all-powerful patron really is the main roleplaying thread for that class.

Most of the patron choices presented in the rules are those dark entities generally associated with evil or mystery: fiends, undead, dark fey, etc. Some alternative rules present a few breezier options, but most warlocks are all about the dark clothes and heavy eyeliner.

When handled with subtlety, this connection between a warlock and their patron makes for great storytelling. Drama (as a storytelling medium) thrives on relationships, and on power dynamics within relationships—and what could be more interesting than the power dynamic between a warlock and a patron that provides such breathtaking abilities at the cost of complete obedience.

So much dramatic potential rests within the sphere of warlocks. What is the character willing to do for the power that their patron provides? What have they given up for that power, and what have they gained? Is the power worth what they must do to stay in their patron’s good (or evil) graces? 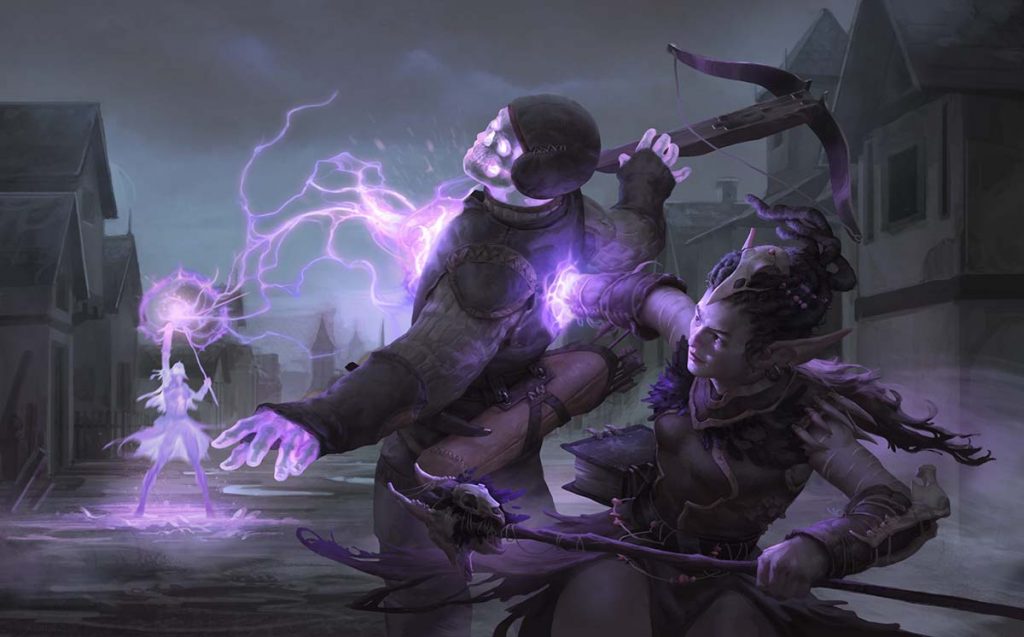 The Contradiction of Warlocks Between Storytelling and Gameplay

One of the joys of 5e (and countless other roleplaying games) is that it’s several games in one. These different types of games within the game are often at odds, however. This can make the game awkward when some players at the game table tend toward one type of game, while other players tend toward another. This is often highlighted in classes like the warlock, where the character is beholden to a higher power for its abilities.

It doesn’t require too much imagination to envision some incredibly awkward in-game situations cropping up. How many adventures or campaigns involved the characters working to stop the machinations of this or that devil? So many!

When one of the members of the adventuring party is a warlock who serves a fiendish patron, I’d love to be listening in on that conference call.

Fiendish Patron: So, remember years ago when you called on me to give you the power to shoot hellfire out of your eyes and singe the souls of your enemies?

Warlock: Yes. I was there.

Fiendish Patron: Yeah, it was a Thursday. You were in pretty rough shape. Might have been hitting the bottle a little. A pretty dark time for you, if I recall. And I was there for you.

Warlock: I gave you my soul!

Fiendish Patron: True. True. Not that it was worth a heck of a lot at the time. Well, anyway, so we made this bargain. And yesterday you and your friends totally wiped out my friend Frank and his friends while they were doing a ritual in my name. What was that all about?!

Warlock: They were killing townsfolk and trying to summon a monster that would have destroyed half the world!

Fiendish Patron: Frank was one of my most valuable employees. Senior management, working on a plan that I specifically discussed with him. So I’m going to need you to cut that out.

Warlock: OK, sorry about that. I didn’t know. We’re still good though, right?

Fiendish Patron: So, yeah, I’m going to work this weekend….

Long story short: When the game-mechanical abilities of a class are so closely tied to a story-centric element like powerful evil entities, one side of the equation tends to suffer. And it usually ain’t the game mechanics! 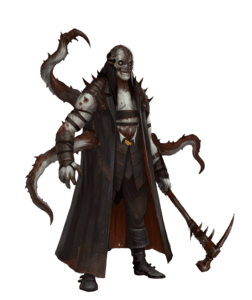 Setting aside the narrative and roleplaying aspects of the warlock, the class is mechanically unique. And let me be clear, unique isn’t necessarily good. Nor is it necessarily bad.

Most classes pick their subclasses at some level after level 1. Mechanically, this is a fine thing. It allows for the first level or two of play for that character to focus on the basics, especially for new players. A character can see the world a bit—and the players can see the rules a bit—before they’re forced to make a choice that’s going to affect their character so deeply for its entire game-life.

Like a cleric, however, warlocks are forced to choose their subclass at level 1, right at character creation. This way make sense narratively—you made that deal with an arch-devil as a toddler to get that extra scoop of ice cream and now you’re stuck with it—but the game designer and game teacher in me wishes that all the classes worked the same way in terms of timing for selecting subclasses.

The hardest mechanical system for most fantasy RPGs is the magic system. Trying to model rules for a system that, by its very nature, is meant to supersede the very idea of rules. Magic allows the impossible to be accomplished with a wave of a hand. If you push too far in one direction, a magic system can totally destroy game balance in the game. If you push too far in the other direction, magic loses its sense of wonder and power, and it becomes just another way to deal damage or push an enemy around the battlefield.

5e does its best to strike a balance, succeeding in some ways and failing in others. (We’ll talk more about this when we discuss wizards and sorcerers.) What the game does for sure, however, is create a very specific and regimented system of magic across all the classes. Except the warlock!

The warlock, in terms of the word and its understanding in culture, is a powerful user of magic that is usually associated with dark and forbidden forces. In that sense, 5e does a great job of capturing that theme. Mechanically, however, the class is a right mess. That mess can be fun, and can be powerful, and can be used to create memorable characters, but it’s a mess nonetheless.

Tying the refreshing of game-mechanical abilities to a storytelling consideration like rests adds to the complexity of creating and running adventures. And in a lot of ways, the warlock is a key pawn in this chess match.

If the warlock’s GM allows several short rests within their adventures, the warlock can be just as powerful as a wizard, with a little less flexibility in spell choice. On the other hand, if the story requires a long adventuring day with no short rests, the warlock is likely to burn those spells slots quickly and it turns into a day of eldritch blast drudgery.

Death by Choices (or lack of them)

Another thing about the warlock that is different than most other classes is the sheer number of choices made during character creation and leveling, which generally lead to a lack of choices during game play.

We’ve already talked about how warlocks need to choose a patron at level 1. At level 2, the warlock must choose an Eldritch Invocation. There are several choices, and more and more choices available are added from supplements and third-party products by the day.

Making this more problematic is the fact that some of the invocation choices are limited by the pact boon chosen, but that choice isn’t made until level 3! Often, however, these invocation choices don’t really give the player more choices at the game table—they are generally static abilities or ones that give you one more spell to cast at obvious times.

Then at level 3, the warlock must choose the pact boon. In some ways these options don’t mean a lot in terms of the power and play for the character, while in other ways they can be majorly important and be at the very essence of what the character is and does in combat. The wildly incongruous power levels that can be achieved (or not) make these options a difficult challenge of players, especially new ones.

The fact that the warlock can be so problematic in design, creation, and play—and still be manageable for players and fun to play—is a testament to the solid foundation that 5e has as a game!