Here we are, at the final session of our series on using Classical mythology to strengthen your TTRPG encounters. From subconscious expectations inherited from ancient narrative conventions, to dynamic changes during combat, to the dramatic tension of narrowly avoiding combat entirely; we’ve covered a lot of ground!

For this last entry I’d like to give some love to location, location, location. One fun thing about playing TTRPGs is that we get to shape the setting. A city full of waterfalls and culturally sophisticated dinosaurs. A network of mystical ice caves that reflect the memories of whoever looks into their walls. An echoing and empty space craft, out of fuel and drifting. Anything is possible, and where we set our games makes a huge difference in establishing the tone and understanding of the story we want to tell.

Greek mythology is similarly full of spectacular geographies, both real and legendary. Three hold particular sway in the stories of adventure we continue to craft today; the Greek underworld, Hades; the sunken city of Atlantis; and the Labyrinth of Crete. The first two are brilliantly evocative locations which would make wonderful settings for an entire TTRPG adventure. However, if we’re looking for the best example of a single mythological story which relies on the place in which it is set, it’s difficult to look past the story of Theseus and the Minotaur.

The Minotaur and the Labyrinth 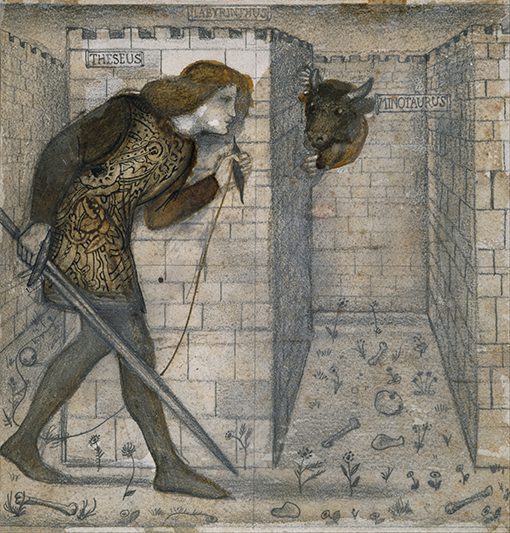 Androgeos, the prince of Crete, was the greatest athlete of his age. So great, in fact, that when he went to compete at the games in Athens, where he won every single event. The other jocks weren’t too stoked about this, so they all got together and decided that the best response was to murder him. Who ever said jocks weren’t smart?

The king of Crete, Minos, held the city of Athens responsible for his son’s death and sailed over to wage war. It just so happened that King Minos was also a child of Zeus, so with the king of the gods on his side it’s no wonder that Athens fell to Minos’ might. When the city surrendered, Minos demanded – in exchange for his mercy – that 7 young Athenian men and 7 young Athenian women would be sent as tribute to Crete every year.

Rumor had it that Minos’ wife had once fallen mad with lust for a bull and bore its inhuman child; the Minotaur – half man, half beast. As it grew, so did its hunger for human flesh. So the king had called on Daedalus, the greatest mind of the age, to build a prison for the monster to keep it contained.

The result was an impossible maze, deep underground within the island of Crete. Minos intended to use the children of Athens to satiate the beast’s hunger, and keep it satisfied year after year.

Several shipments of tributes later, we meet Theseus – the long-lost heir to the throne of Athens. His wicked stepmother wasn’t too keen on Theseus showing up in town because she wanted her child to be the only heir. When the latest demand for tribute came from Crete, she leaped at the opportunity to put him onto the ship with the others who were set to be sacrificed.

On arrival in Crete, while Theseus waited to be thrown into the Labyrinth, Minos’ daughter Ariadne fell in love with the Athenian prince. She snuck him a dagger, but that wouldn’t be enough – even if Theseus managed to kill the Minotaur, he’d still be impossibly lost with no means of escape!

Ariadne knew the man who’d built the maze. According to Daedalus, he’d only been able to find his way out after completing construction because he had tied the end of a ball of string to the entrance, unraveled it as he walked, and followed it back when it came time to leave.

Armed with a blade and a ball of thread, Theseus ventured into the shadowy, endless corners of the Labyrinth to face the monstrous Minotaur and the threat of the maze itself.

The Labyrinth as a Location Looms Large in the Western Imagination 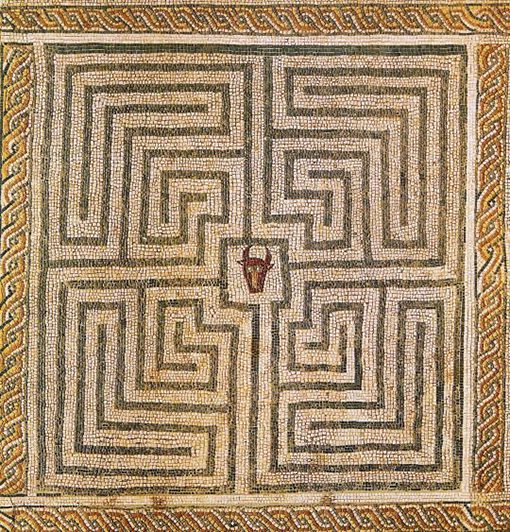 The physical setting of the myth is important to Theseus’ story, adding interest and threat where our hero would otherwise be expected to easily defeat the Minotaur. And yet, apart from a few evocative descriptions – Nonnus called it “earthdug” and Ovid told of “halls of rock cut out in winding ways” – the presence of the Labyrinth itself is quite brief within the tale. Nevertheless, the imagery of the place has captured artistic minds since ancient times.

The idea of the Labyrinth is what people remember.

The associations attached to the concept of a dark and unnavigable maze serve to reinforce the mood of the Minotaur encounter in our minds. It seems inescapable, like running or hiding would be pointless. It encourages a sense of uncertainty, both of what might lurk around the bend and of the hero’s own progress. It can only be overcome by cleverness and problem solving, resisting a brute force approach.

The maze not only serves as a physical obstacle, it also tunes audience expectations to the appropriate emotional wavelength for the adventure at hand. Even lots of modern uses of the maze reflect the power of its ancient symbolic associations.

Corn mazes at Halloween, or the hedge maze from Kubrick’s adaptation of The Shining, show a continued connection to monsters, to the frightful anticipation of not knowing what you’ll find around the next corner, and to the instinctive desperation to get out.

Building Encounters with a Location in Mind

When we design encounters for 5e, we can sometimes become so caught up in the player characters, villains, and NPCs that we let the place it’s all happening become little more than a painted Hollywood backdrop – nice, but not very interactive.

When we give attention to the location of an encounter it gives us a chance to emotionally engage the players in their character’s situation using the power of symbolism and metaphor. A simple fight with an evil old woman becomes more sinister and surprising because it’s juxtaposed with the sweetness of a gingerbread house. An ancient temple becomes more mysterious and enticing for the thousands of years it has spent buried beneath isolating desert sands. A test of will, to keep fighting against the hopelessness in your head becomes more visible and embodied when there is a mud-thick swamp ready to suck you under if you falter.

Once the location is established narratively, it helps to back it up mechanically. If you were to run a combat in a sprawling fantasy city, you might want to give the impression that this encounter is crowded, fast-paced, and risky. It would be one thing to say, “there’s a lot of people in the street watching as the combat plays out”. It’s entirely another to have the villains grab bystanders from the crowd to threaten, or to have the heroes roll perception regularly to keep sight of their quarry fleeing amongst the throng.

Facing down a dragon atop a gargantuan hoard of gold might be a great touch to make the heroes feel small, add to the grandeur of their foe, and make the problem seem insurmountable. The piles of gold could just be set dressing and loot for later on, that’s simple enough. But if every time the dragon moves it sends the gold – and the heroes on it – sliding, or if the gold begins to melt into dangerous molten pools around the dragon’s fire breath, then both the characters and the players are engaged with their surroundings. They feel a much stronger sense of place. They become that little bit more immersed in the story.

A Word to the Wise with Regards to Location Mechanics 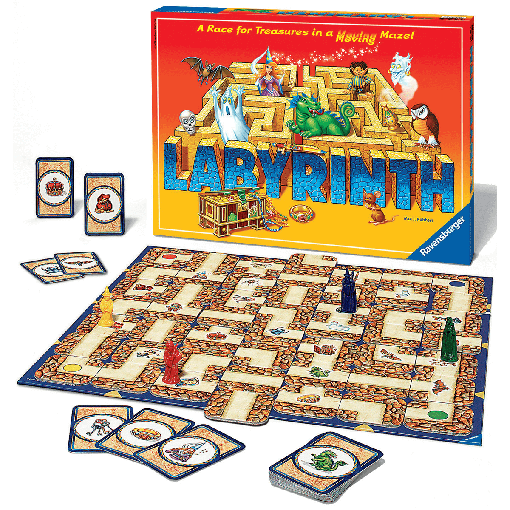 Particularly within games like 5e, when the existing environmental rules are used in combat, they can feel like a bit of a drag. This is because they can often create situations that are more of a tax on the players than something they are called to react to. Difficult terrain just makes characters slower. Being knocked prone just requires the character to stand up. Darkness just makes it harder for the character to land a blow (unless, of course, they’re one of the thousand and one races that come with darkvision baked in). There’s nothing wrong with these functions in and of themselves, but they don’t give the players at your table very much to think about.

The Labyrinth is a good example of an environment that needs consideration in its mechanical implementation.

On its own, a maze doesn’t necessarily give players much to react to – regardless of whether they turn right or left, the characters still don’t know the way out. The Labyrinth works best when it involves two or more groups all moving at the same time, uncertain of each other’s whereabouts. Maybe hunting for the same thing. Maybe hunting for each other. The constant movement highlights the unpredictable uncertainty of the place. Like that board game from the 80s!

Giving players room to react to their surroundings is key – it might even use their reaction for a given turn! Instead of the sliding gold simply knocking the characters prone, or creating difficult terrain, give your players space to interact. Maybe you’ve made a point to include fixed pillars the characters can hop across without being affected. Or maybe they can spend their reaction to steady themselves and hold their ground. Maybe they can use the shifting surface to slide quickly to a new position elsewhere in the room.

In an ideal world, the game location should be a jungle gym, not a painting. 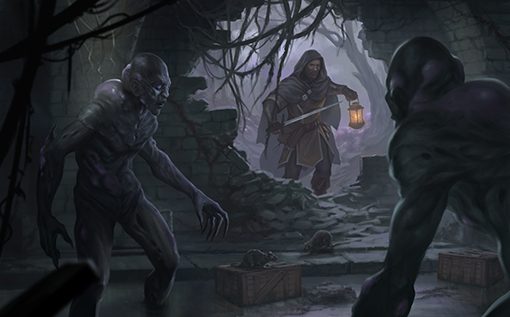 Throughout this blog series we’ve been studying the mythology of ancient Greece and how to narratively structure memorable monster encounters. Piece by piece we’ve been able to add more tools to our belt.

The first tool, we were given by Hercules after he defeated the Hydra. We learned to add a dynamic shift in the action mid-way through an encounter. No matter what it might be, a change to the status quo that arises through combat can enliven the battle and keep your players on their toes.

The second tool was a gift from Oedipus after he outwitted the Sphinx. We learned that catching players on the precipice of combat, the anticipation of the fight, can sweeten the combat itself if, and when it happens. If we can keep our players questioning the risk and reward of a fight, it will foster interesting choices with interesting consequences.

The third tool was from Theseus after he successfully navigated the Minotaur’s Labyrinth. We learned that making the conceptual location central to our encounter design serves the mood of the encounter and its place in the wider story. It adds additional obstacles into the mix, a complexity that cannot be ignored, and empowers the narrative through subconscious symbolic and metaphorical understanding.

Any or all of these three tools could be combined or omitted to adjust the intensity and immersion of a given monster encounter in your tabletop roleplay game. Applying just one might add a salt bae sprinkle of seasoning to keep a simple combat engaging in an otherwise straightforward session. Applying all three can give weight to the build-up and payoff of a major boss battle.

The stories humanity told centuries ago are with us still. If we listen to them, if we look for the patterns they make, we can access the power of a secret language of stories. One that we all speak and understand implicitly, whether we realize it or not.