Whenever a holiday or celebration comes up, it’s fun to think about related world mythologies and how one might make a 5e adventure of the creatures found within. With St. Patrick’s Day upon us, many a river will be dyed green, and pubs crowded with revelers.

St. Patrick’s Day has long been associated with leprechauns and luck although it has its origins in religion. There are plenty of mischievous fairies and other light-hearted creatures to draw inspiration from. But more befitting of the Grim Hollow setting are some darker monsters.

Let’s visit some femme Irish monsters with a fresh outlook: the Banshee, Cailleach, and Dearg Due. With a few alterations, each of their stories can be retold from a modern perspective while also giving their related monster stat blocks some cool and surprising abilities.

These three monsters can easily appear in a 5e one-shot or as part of a longer campaign with some minor alterations to existing stat blocks. By doing so, you can provide an element of surprise for your players, particularly if they’ve encountered similar creatures in their adventures already.

Banshees are not known for being quiet types. The characters are asked to investigate the wails coming from the woods, which speak the name of locals who are found dead the next day. The villagers would obviously like this situation to stop.

Ever since a new farmer in the village has discovered a corn doll in their field, some strange things have been happening around their house. They need help getting to the bottom of the matter.

Every year a creature rises from the graveyard on a murderous rampage and the townsfolk want to put an end to its curse once and for all.

The world of Irish mythology has a wealth of monsters to offer. Many of these creatures stalk the fringes of civilizations and settlements. These three represent women often maligned in the telling of their stories. An adventuring party may well desire to slay these monsters outright, but their tales have nuance, and their malicious intent is not without base. 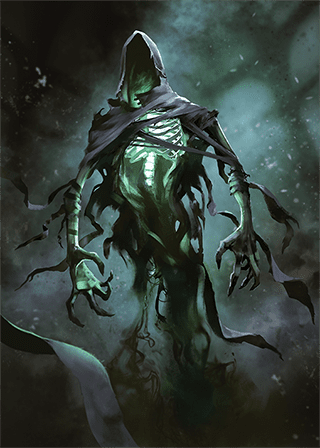 The banshee is a female spirit in Irish folklore who heralds the death of a family member. They are the “fairy women” associated with burial mounds that dot the countryside. In their monster stat block description, it is said that they were once blessed with beauty but “failed to use their gift to bring joy to the world.” Whatever you do, please don’t tell a banshee to smile.

An encounter with a banshee is one where the depths of her despair can influence those near her. When characters encounter a banshee, she can be young or old, but her eyes are red from continual weeping. It’s fitting to replace Horrifying Visage with the following monster trait instead.

Sorrowful Aura. At the start of each of the banshee’s turns, each creature of her choice within 5 feet of it must succeed on a DC 13 Constitution saving throw or take 10 (3d6) psychic damage, provided that the banshee isn’t incapacitated.

The banshee is also a harbinger of coming doom. If someone is about to enter a situation where they are unlikely to survive, she warns them by screaming or wailing. Consider removing Wail and giving her the following alternative action.

Death’s Door. The banshee targets a creature it can see within 30 feet of it. The target must make a DC 13 Wisdom saving throw. On a failed save, the target takes 10 (3d6) psychic damage and sees visions of their own death.

By making these adjustments, the banshee becomes a creature that isn’t necessarily evil but certainly causes harm. 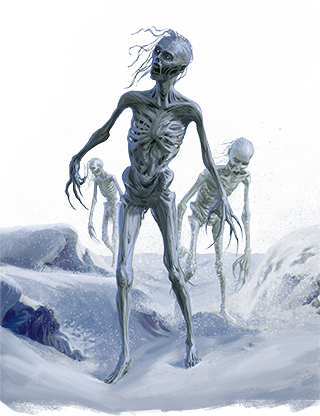 The Cailleach is a hag associated with the weather, particularly storms and winter. She is a one-eyed giantess with white hair, dark blue skin, and rust-colored teeth who is also credited with shaping the landscape which is said to have been formed when she was striding across the land with a hammer.

Just like the “Creepy Doll” adventure hook, there is a tradition whereby the first farmer in an area to complete their grain harvest makes a corn doll from the last sheaf of the crop. It’s meant to representing the Cailleach. The doll is tossed from field to field to any neighbor who hasn’t yet harvested their crop. The last farmer to complete their harvest is responsible for the doll for a year, with the implication they’d have to feed and house the hag all winter. In this case, the villagers have surprised a new farmer with an old tradition, but the hag turns out to be real and is expecting some hospitality!

Start off with the green hag stat block and then make the following changes. Cailleach is a Large creature, her hit points are increased to 112 (15d8 + 45), and she has immunity to cold damage. In keeping with her theme of winter, include the following trait.

Ice Walk. The Cailleach can move across and climb icy surfaces without needing to make an ability check. Additionally, difficult terrain composed of ice or snow doesn’t cost her extra movement.

Next, Cailleach carries a magic hammer that is a focus for her inner power. While wielding the hammer, she can cast additional spells with her Innate Spellcasting trait (these spells are marked with an asterisk). In addition, attacks made with the hammer are magical. If the hammer is lost or destroyed, the Cailleach must craft another, which takes a year and a day. Only the Cailleach can use the magic hammer.

A hag, of course, needs spells. And this one should be themed out appropriately for weather, cold, and landscaping. She has the following trait.

Innate Spellcasting. The Cailleach’s innate spellcasting ability is Charisma (spell save DC 12, +4 to hit with spell attacks). She can innately cast the following spells, requiring no material components:

At will: entangle*, move earth*, ray of frost

3/day each: cone of cold, ice storm, wall of ice

The Cailleach replaces the green hag Claws action with the following.

Perhaps the competition to bring in the harvest is fierce in this village to avoid having to take in the Cailleach as a guest. This could be because though she is frightening, she is also terribly misunderstood. Of course, there could still be terrible implications for how brutal the winter is on the village if she isn’t dealt with in a suitable manner. Finally, the Dearg Due is a female demon that seduces men and then drains them of their blood. According to the Celtic legend, she was once an Irish woman who was known throughout the country for her beauty — a common theme with femme villains. She fell in love with a local peasant, but her father promised her hand to a wealthy and notoriously atrocious clan chieftain in exchange for riches and lands for himself.

After being badly mistreated, she committed suicide. On the first anniversary of her death, revenge pulled her from her grave. Consumed with anger and the need for retribution, she rose from her grave to seek revenge on her father and husband, sucking their blood until they dropped dead. It is said her lustful yearning can only be satisfied on the day she died, so on the eve of her anniversary locals gather and position rocks upon her grave so that she will not rise and take the blood of the innocent.

Use the succubus stat block as a base for the Dearg Due but make some alterations to give her more vampiric abilities.

Replace her Claw attack with the following action instead.

Blood Drain. Melee Weapon Attack: +5 to hit, reach 5 ft., one creature. Hit: 6 (1d6 + 3) piercing damage, and the Dearg Due attaches to the target by sinking her teeth into their skin. While attached, the target is grappled and Dearg Due can’t attack. Instead, at the start of each of the Dearg Due’s turns, the target takes 6 (1d6 + 3) necrotic damage due to blood loss. The Dearg Due can detach herself by spending 5 feet of its movement. She does so after she drains 10 hit points of blood from the target, or the target dies. A creature, including the target, can use its action to detach the Dearg Due.

Draining Kiss is an attack that seems out of place for a creature that wants revenge for a forcible marriage to a brutal human so replace that with the following action.

Vampiric Grasp. The Dearg Due touches a creature charmed by it. The target must make a DC 15 Constitution saving throw against this magic, taking 15 (3d6 + 5) necrotic damage on a failed save, or half as much damage on a successful one. The Dearg Due regains hit points equal to half the amount of necrotic damage dealt. The target dies if this effect reduces its hit point maximum to 0.

Fighting the Dearg Due presents another moral quandary. While she is the victim of terrible abuses, she is also cursed with bloodlust. How an adventuring party handles the situation varies with how much they can empathize with either the monster or the villagers, and if they can discover a means of appeasing the monster or setting her free from her curse. As GM you may choose to have her only target evildoers which adds even more complexity to the situation.

Although the three monsters presented here aren’t related to one another within Irish mythology, they could be featured together in a way that works for a longer campaign. Perhaps the adventuring party is tasked with solving crimes of the supernatural kind, of they’ve taken on monster hunting contracts.

There are also ways to continue these storylines once the quests are complete. For instance, the longest night of the year marks the end of the Cailleach’s reign as Queen of Winter, at which time she visits the Well of Youth. What happens if it runs dry when another hag or mortal drinks from it?

Of course, no adventure would be complete without some magic items. Consider creating some monster salvage that fit with the theme.

While wearing this shawl, you can use an action to pull the fabric over your head to cause yourself to become incorporeal for up to 1 hour. While you are incorporeal, anything you are carrying or wearing is incorporeal with you and you can move through other creatures and objects as if they were difficult terrain. You take 1d10 force damage if you end your turn inside an object. You can end this effect early by using a bonus action to cease wearing the shawl over your head.

While wearing the shawl, you can use your action to cast augury. The shawl can’t be used this way again until the next dawn. 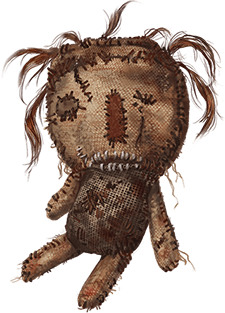 This corn husk doll is shaped to look like an old woman and can be used as an arcane focus. While holding this item, you gain a +1 bonus to your spell save DC and spell attack rolls. In addition, you ignore half cover when making a spell attack.

While you are wearing this fang pendant and attuned to it, you can access the following properties.

Charming Presence. While you are wearing no armor, you can add your Charisma bonus to your Armor Class.

Demonic Sight. You gain darkvision with a radius of 60 feet, or for an additional 60 feet if you already have darkvision.

Demonic Tongue. You can speak and understand Infernal.

Vampiric Touch (1/Day). The touch of your hand can siphon life force from others to heal your wounds. A target must succeed on a DC 15 Constitution saving throw or take 3d6 necrotic damage, and you regain hit points equal to half the amount of necrotic damage dealt.