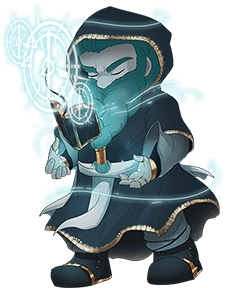 “I understand there are three folk dead, but I’m not a lawman or a bounty hunter. Common folk are not my specialty. I’d rather not stain my weapons with commoners blood if I needn’t, and I don’t carry a special sword just for them.”

– Jürgen of the Black Arrow

As soon as I stepped inside the tavern, I was greeted by a waft of warm air smelling of pipe smoke. It was accompanied by the noise of chatter and a cheap minstrel. A burning fireplace and a wooden chandelier hanging overhead did little to properly light the common room.

Folk sitting at round tables turned their leery eyes towards me. I cast my gaze back over them, looking for one among their number. I found him sitting at a table furthest from the fire. Half his face was in shadow and his eyes glinted in the distant light when they met mine. He knew why I had come.

I strode around the outside of the tables. The bartender asked if I’d like a drink. I ignored him. Even the minstrel stepped in my way, a halfling dressed in a purple tailcoat and carrying a lute.

“A coin for the balladeer?” he asked in a deep voice, faking a nobleman’s accent.

I stepped around him. His music continued not a moment later.

I seated myself across from the man I’d come to meet. He smelt of salt and beer. An empty plate was stained with grease and blood on the table in front of him. A was knife neatly placed atop it. One hand rested on the table holding a mug.

His black hair was long and shaggy, his thick beard almost entirely covering his mouth. He had to be over six feet if he stood up. But what betrayed his masquerade as an ordinary traveler, were his amber eyes.

“What you want?” he growled from behind his cup as he lifted it to his lips.

“A man matching your description killed three folk two nights past,” I whispered, “by the stables at the bottom of the hill. That man went into hiding. I’ve a contract to find him.”

The man was silent. His yellow eyes looked away.

“We can do this outside away from these folk,” I suggested, “and not interrupt the minstrel’s song.” 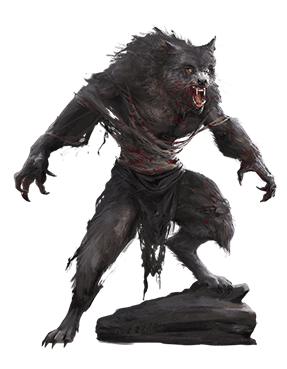 His eyes turned to me again with calm intensity. I could see him studying my armor and weapons, trying to discern who or what I was. I was unsure if he was about to lunge at me or flee for the exit.

The table crashed on its side. We stood together but he grappled me before I could back away. I went hurtling over another table and into some poor chap’s lap before we both fell on the floor.

When I stood up my quarry was sprinting towards the rear door, though he no longer looked the rugged traveler. Instead of a man stood a snarling black beast with a wolfen head and claws for hands. Patrons screamed and scrambled away.

The arms of my crossbow opened as I pulled the weapon into my hands, and I loaded it with a silvered bolt. I aimed down the sights right as the lycanthrope reached the rear door to dash through. Yet before my finger found the trigger, a voice spoke in my head:

A wolf and a hunter
Together shared a drink
And whilst the wolf did flee
The hunter could not think!

Those whispered words drowned out my every thought. It was the minstrel’s voice. I felt as if I would faint. My bolt embedded itself in a timber beam and the wolf was gone through the doorway.

I drew a knife instinctively and turned to find the halfling. But again, I heard a whisper. It was a snarl. It was many voices and some muttered and others screamed. I knew who each of them belonged to and each reminded me of the cruelty I had inflicted upon them. Some voices belonged to monsters, but others were commoners, and each made me feel dreadful fear or guilt.

I ran from the tavern and the cacophony of voices. I found myself in the street among those who had fled the monster. Never in my life had I felt such strange panic to feel so foolish afterwards. Clearly, I had been hexed by a spell.

I have only heard of musicians that could wield arcane power, never seen it for myself until that evening. With a whispered verse I felt entirely powerless. Monsters were my expertise; I had no way of defending against a mage.

I found the tracks of the lycanthrope from the rear of the tavern easy enough, though I did not pursue. I would need help before I would be ready to face that duo again, and the answer to a peculiar question.

Why would a minstrel be protecting a lycanthrope?

By 15th level your reputation has become such that monsters who prey on the fearful have come to fear you. When you mark a creature using a Grave Strike attack, you can force the target to succeed on a Wisdom saving throw or become frightened of you until the end of your next turn.

The saving throw DC is calculated as follows:

DC = 8 + your proficiency bonus + Strength or Dexterity modifier (your choice)

At 15th level you have learned to modify a set of light or medium armor by crafting dragon scales, werewolf hide, troll leather, or similar monster salvage onto the armor. The armor takes on the appearance of your choice, reflecting the salvage it is made from. It is assumed you have been working on this armor during your down time, however a final 4 hours of uninterrupted work with your Tinker’s tools and a suit of light or medium armor is required to complete it.

Your Monster Hide Armor has the same properties as the light or medium armor it is made from plus two additional features you choose from the following list.

Elemental Charge. Your armor may be embedded with a construct’s gemstone or infused with the power of an elemental. When you craft your armor, you imbue it with one of the following damage types: acid, cold, fire, lightning, poison, or thunder. Whenever you make a weapon attack, you may choose for the damage to be the weapon’s normal damage type or your armor’s imbued damage type.

Hardened Defense. Hardened scales or magical pelt make your armor difficult to pierce. You have a +2 bonus to AC while wearing this armor.

Regeneration. Possibly made from troll hide or infused with vampire blood, while wearing your armor you can use a bonus action to regain hit points equal to 1 hit dice plus your Constitution modifier. You may do this 6 times, regaining the ability to do so after completing a short or long rest. Using this ability does not spend a hit dice.

Phase Leap. You may have powdered your armor with fey dust or sewn it with the pelt of a phase shifting monstrosity. You can use a bonus action on your turn to teleport up to 60 feet to an unoccupied space you can see. You may do this up to 3 times, regaining the ability to do so after a short or long rest.

You can only have a single monster hide armor constructed at a time. You can change the features of your current armor with 4 hours of uninterrupted work using your Tinker’s tools. If you craft a new suit using 8 hours of uninterrupted work with your Tinker’s tools and a suit of light or medium armor, it is assumed the old armor has become too damaged to function or you have salvaged parts from it to craft the new one. 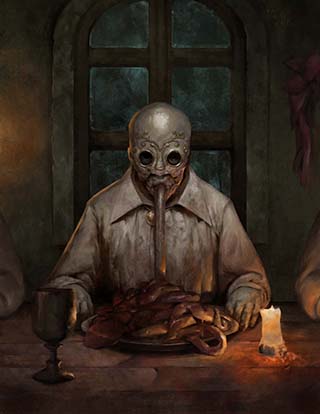 When you reach 15th level you have become so ravenous for the power monsters give you that you are willing to feast on their still living flesh. You may spend one use of Grave Strike to instead make a special melee weapon attack using either Strength or Dexterity. The attack deals 1d6 piercing damage plus 1d8 force damage times your Intelligence modifier (minimum 1d8).

If this attack is successful, after dealing damage you instantly count as having consumed a portion of the same creature type as the target of the attack.

At 17th level you have gathered enough information among the monsters you’ve slain to add a final section to your Monster Grimoire.

You may select a new type of monster that you are specialized in hunting from the following list: aberrations, beasts, constructs, dragons, elementals, fey, fiends, giants, monstrosities, oozes, plants, undead, or humanoids (shape changers). You may not choose a monster type you have chosen before. All the benefits you gain from your monster grimoire now also apply to this new creature type.

When you reach 18th level you have become capable of crafting trapper tools at a much faster rate. When you finish a long rest, you can now craft three trapper’s tools instead of two.

At 18th level your hunger for monster portions has increased as has your capacity to safely devour them. You can now consume 1 additional portion or decoction before gaining a level of exhaustion between long rests.

At 20th level if a creature from a type written about in your Monster Grimoire has 50 hit points or less remaining when you hit it with a Grave Strike, you can force the target to make a Constitution saving throw. On a failure the creature is immediately reduced to 0 hit points, while on a success the Grave Strike deals its damage as normal.

Calculate the save DC as follows:

DC = 8 + Proficiency Bonus + your Strength or Dexterity modifier (your choice)