Find the story, Granny Weatherwax always said. She believed that the world was full of story shapes. If you let them, they controlled you. But if you studied them, if you found out about them… you could use them. You could change them.

The Grubby Fingerprints of Mythology are all over 5th Edition 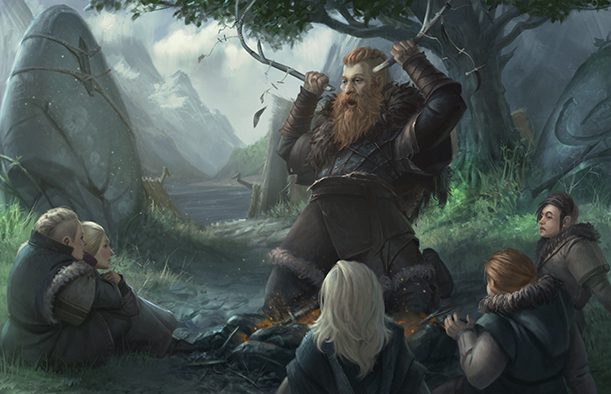 The very oldest stories stand as testament to their own immortality. With the clamorous roar of so many new tales being told throughout time, you’d think the oldest would be drowned out by the din; instead, their echoes reverberate through the new, and the hold of the old tales is strengthened even further. It’s part of humanity, the inability to leave behind things we learned in ancient times. In The Allegory of Love, C.S. Lewis says, “Humanity does not pass through phases as a train passes through stations: being alive, it has the privilege of always moving yet never leaving anything behind. Whatever we have been, in some sort we are still.”

We grow up immersed in the language of our ancient literary heritage. It permeates our lives, as is evident even in something as familiar as everyday phrases; a person’s weakness is their Achilles heel; a book of maps is called an Atlas; to be stuck between a rock and a hard place alludes to the impossible choice mythical heroes had to make while sailing between Scylla on the rocky shore and the whirlpool of Charybdis. We can’t help but recognize the shape of ancient stories resurrected in modern life, almost as if that recognition is hard coded into our cultural DNA. And not only are we able to recognize it, but we seem drawn to retell, repurpose and reshape those stories ourselves – in song, in art, in literature; and tabletop roleplaying games like 5e are no exception.

In the beginning, Eve gave Adam fruit from the tree of knowledge. The biblical story of the creation of woman is quickly followed by the story of her misleading man and causing him to fall from grace. “It was the woman you put here with me,” Adam says in Genesis 3, “She gave me some of the fruit, and I ate it”. The archetype of a tempting woman is seen again in Bathsheba, Delilah, Jezebel, Salome, in Solomons wives; women who are accused by the text of being so irresistible that they lead men to sin, sometimes by merely existing.

In Classical literature the motif occurs again, most notably in the shape of powerful women who are dangerous because of the sway they hold over men. In Homer’s Odyssey we’re introduced to the sorceress, Circe, who turns the heroic sailors into pigs:

Someone, goddess or woman, was singing inside in a clear voice… They called her, and spoke to her, and at once she opened the shining doors, and came out and invited them in, and all in their innocence entered, only I waited for them outside, for I suspected treachery. Then the whole lot of them vanished away together, nor did one single one come out, though I sat and watched for a long time.

Once again, the men in the story become innocent victims of a beautiful woman’s treachery. Once again, there is an emphasis on temptation enhanced by a nurturing offer of sustenance and comfort

She brought them inside and seated them on chairs and benches, and mixed them a potion, with barley and cheese and pale honey, added to Pramneian wine, but put into the mixture malignant drugs, to make them forgetful.

The writing also emphasizes Circe’s beauty and her sensuality as part of her evil. The gods advise Odysseus how to outwit Circe’s “malevolent guiles” by directly instructing him that he must sleep with her adulterously. He has no choice but to sleep with the witch but doing so is still perilous and Odysseus is warned to: “Bid her swear the great oath of the blessed gods, that she has no other evil hurt that she is devising against you, so she will not make you weak and unmanned, once you are naked”. Once Circe is bested and cannot harm the sailors, the danger she poses as a manipulator of men is still central to her role, as seen by the regular refrain, “So she spoke, and the proud heart in me was persuaded”.

Time marches on and the story takes another shape. Morgan le Fay, the sorcerous sister of King Arthur, acts as a recurring villainess who enchants and seduces men to bend them to her will. In La Morte D’Arthur, Thomas Malory’s French inflected collection of Arthurian tales, she comes across Sir Lancelot asleep under a tree: “I will put an enchantment on him, so that he won’t awake for six hours, and then I’ll lead him away to my castle.” She intends for him to give up his love for Guinevere and choose her instead: “only one lady can have your love, and that is Queen Guinevere; now you will lose her forever, and she will lose you”. As he contemplates how he might escape, Lancelot acknowledges his fear of Morgan, because her sorcery has “destroyed many a good knight”.

This motif re-emerges in Shakespearian theatre in the form now of Lady Macbeth. She works to convince her husband to murder the king, but now her husband is getting cold feet. Her advice is to “look like the innocent flower, but be the serpent under it”. Again, treachery is hidden in offers of food and drink: “His two chamberlains will I with wine and wassail so convince, that memory, the warder of the brain, shall be a fume, and the receipt of reason a limbeck only”. She even likens the men to pigs, reminiscent of the victims of Circe’s magic, in their “swinish sleep” and memories that become fumes. 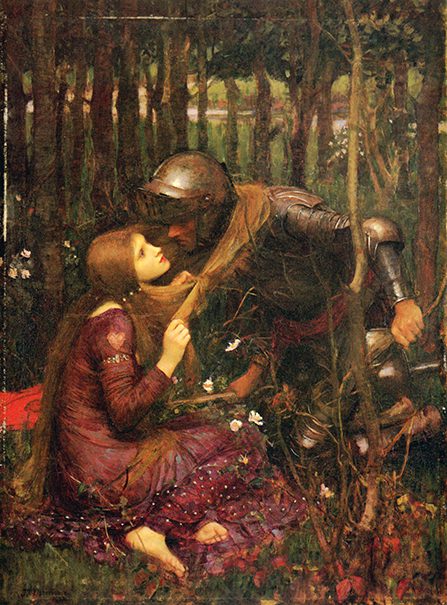 La Belle Dame San Merci, a French term literally translated as “the beautiful lady without mercy”, first appeared in poetry of the 15th century and reappeared as the title of a ballad by John Keats in 1819. The ballad recounts the story of a man enchanted by a beautiful fairy woman, and then left to waste away with longing:

‘I met a lady in the meads, / Full beautiful, a faery’s child; / Her hair was long, her foot was light, / And her eyes were wild… She found me roots of relish sweet, / And honey wild, and manna dew, / And sure in language strange she said.— / “I love thee true”.

Yet again the wicked woman’s entrancing of an innocent man is tied to both beauty and the nurturing lure of food and drink. The enchanted man dreams of the many innocents who came before him, entrapped by the Woman Without Mercy; too late they try to warn him of his peril:

‘I saw pale kings, and princes too, / Pale warriors, death-pale were they all; / Who cry’d—’La Belle Dame sans Merci / Hath thee in thrall!’

It’s unlikely to surprise you that my choice of example from the 20th century is the femme fatale archetype of hard-boiled detective fiction. The works of Raymond Chandler commonly feature a woman defined both by her beauty and the danger she poses to men:

She lowered her lashes until they almost cuddled her cheeks and slowly raised them again, like a theatre curtain. I was to get to know that trick. That was supposed to make me roll over on my back with all four paws in the air.

Femme fatale is, of course, another French term, this time meaning “deadly woman”. Even with the stark shift in genre form the work of Keats, such characterization can’t escape markers of stories past. In The Long Goodbye the femme fatale character is associated with dreams and robbing men of their power of action. Even more specifically, Chandler’s use of the terms ‘fairy princess’ and ‘too pale’ familiarly echoes our foray with La Belle Dame Sans Mercy:

Right then a dream walked in… Her hair was the pale gold of a fairy princess… Her eyes were cornflower blue, a rare color, and the lashes were long and almost too pale… She sat down and slipped the gloves under the strap of her bag and thanked him with a smile so gentle, so exquisitely pure, that he was damn near paralyzed by it.

And even Critical Role carries traces of these stories from the past. Campaign 2 introduced the character of Avantika, a beautiful elven pirate with a French accent who wields a dark power. She deceives, manipulates, and flirts up a storm, finally seducing one of the male heroes over a glass of wine. Beyond being a dangerous but enticing woman, beyond the broad scope of the archetype, other small things from earlier stories filter through. French. Fey ancestry. Dark magic. Offerings of wine. These seemingly minor elements bear out the potency of earlier tales, resonating with the timeless echoes of storytelling.

I’m talking about these narrative echoes as though they are inescapable… But that isn’t entirely true. Even while immortal, they are still living, and living things must evolve. In some ways, their immortality even relies on it.

When we craft new stories on the foundations of the old, we react to them. We modify, criticize, and defend. We resist, allow, challenge, emphasize, endorse, apply caveats, edit and alter. In every telling of the same old story, we have the opportunity to turn that story into something new.

There’s a choice to be made; allow the weight of familiar tropes, arcs, and archetypes to control the direction our stories take, or harness them and decide for ourselves. Conscious engagement with enduring narrative resonances equips us to invoke powerful responses from our listeners. Medieval scholar Hans Jauss highlights the value of both utilizing and altering old stories, suggesting that “pleasure is provided by the perception of difference, of an ever-different variation on a basic pattern.” By employing resonant stories but then deliberately playing with expectations, the tale receives a jolt of life. It provides, as Jauss says, “the charm of an already ongoing game with known rules and still unknown surprises.”

The players at your table are just another kind of listener, in the same way that the adventure you run is another kind of story. Once you notice all the traces of past stories in the game you’re running, they become dials you can adjust to manipulate and anticipate; mold player expectations; shape the whole experience more exactly to your desires. Moving forward, this blog series is going to apply a conscious awareness of past stories to the specific issue of preparing monster encounters. 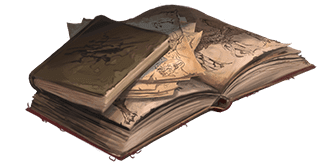 5e is, in many ways, a game about fighters, wizards and rogues fighting monsters. Maybe alongside these conflicts we get insights into the personal stories of those heroes—their triumphs and shortcomings, their relationships with family and comrades, the reconciliation of their pasts with their current lives—but the action that drives those narratives is, typically, the slaying of a monstrous thing. Not incidentally, this is a narrative resonance reaching back to Classical mythology.

And so it is to Classical mythology that we will be looking. By examining the mythical tales of the Hydra, Sphinx, and Minotaur for familiar resonances, we will discover practical applications that can make your monstrous encounters the stuff of legends.