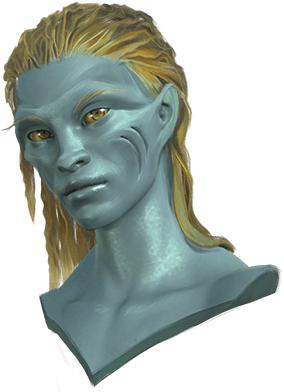 Sea cultists from a sacrificial caste system. The unconquered sea folk. Ritualistic murderers. Monsters from the oceans. However you choose to describe the laneshi, that’s merely the surface of who they are. To know them, you must delve deeper.

Under the sea, the laneshi people belong to the Llana’Shi Empire. Wherever they swim and make war, their nation prospers. As a realm without roads or fixed borders, their submersed empire survives on the unity of its citizens’ customs, rituals, and bloodshed. Existing in a strict caste system, the laneshi people embody one of the oldest, best-preserved cultures in Etharis. During the Age of Expansion, in which humans supplanted all other species as the dominant power on land, humanity’s onslaught could not touch the laneshi’s underwater empire. Insurmountable in their element, the laneshi maintain a uniquely untainted culture apart from the surface world, which is dominated by changing and mixed societies.

Impressive underwater structures of cut stone and grown coral dot the ocean floor of the empire. These great works come from the labors of the laneshi’s undead. Home to possibly the most powerful necromancers across Etharis, the Llana’Shi Empire is populated with undead that perform endless tasks. Surface scholars tend to think of the Llana’Shi Empire as a realm of filth. On land, as an undead servant rots its detritus flakes to the ground and is left behind. However, the laneshi’s undead rot in the water and so their waste must float. Surely, the laneshi breathe in this water and inhale the putrescence.

Even a merchant from Ostoya, where undead are constant, was disgusted by the overabundance of animated corpses that swim alongside the laneshi. She wrote, “Make no mistake, swimming next to your undead servant presents a hazard. Sharks can smell the corpse from many miles.” To the laneshi, such a danger is an asset, their culture considering raw shark meat a delicacy.

From time-to-time, embassies from the Llana’Shi Empire emerge from the ocean to negotiate with the surface kingdoms. The laneshi can survive on land, though their preference remains for the saltwater of their home. When they travel to the surface seeking human contact, the matter is usually dire, for they would not make the journey and discomfort themselves otherwise.

Isolated in their water world, the laneshi have crafted a flourishing yet homogeneous (and many would consider horrific) society. Witnessing the intricacies of laneshi culture observes a reverence more appropriate for a cultish religion than a civilization. Laneshi are raised in a rigid caste system to believe that they have a predestined place within their nation, and every aspect of their life is predetermined including their job, status of authority, military expectations, or even if they’ll survive past their birth.

There are several assumptions that can be made when you hear a laneshi refer to themselves as we. Chiefly, that they are part of the mystic caste, meaning they have a sacred duty to death, funeral rites, stonework, and food preparation. They are a “lone twin”, the firstborn survivor of a twin birth. To augment the firstborn, the second twin was ritually sacrificed and their soul bound to their sibling. The survivor is a mystic with innate necromantic magic and a vocation for working with all that is dead.

Their origins are brutal and abominable, but the most disturbing assumption you can make about a laneshi mystic is this: they don’t view their circumstances as obscene. Their twin was sacrificed to give them power and they accept that as their due. If that mystic births twins, they’re expected to sacrifice their second born. Again, they are comfortable with this arrangement. To a laneshi of the empire, caste is more important than family. Such a sentiment seems callous to other races, but within their ritualised culture, laneshi kill to determine which social strata they queue with. 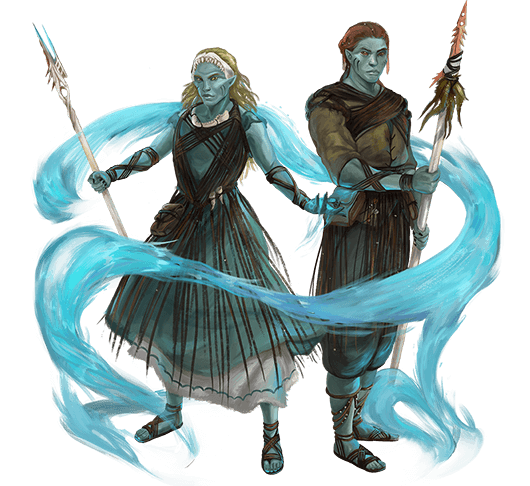 The laneshi also have a saying, “Second born, first to die, last to paradise.” That adage acknowledges that their ritual of binding two souls into a single body prevents the second soul passing from this plane until their sibling expires. Analyzing that saying reveals more about the mindset of the Laneshi as a whole. In a society where twins are common, the decision to always murder the second born sounds unimaginably cruel. Yet, parents are eager to bear two children so they can kill one to make the other stronger. It seems like an impossible mindset unless you understand that surviving in the ocean is a daily ordeal. Sharks and other predators, fishers and whalers, pollution and withering diseases, food shortages and the Llana’Shi’s own draconian laws all make life under the sea short and painful unless you are strong. Combining the children reduces the number of mouths to feed. Fish can’t be herded like surface livestock, and meat spoils quickly underwater. This is to not even mention the ancient and unspeakable aberrations that lurk in the deepest places of the world.

Studying the laneshi and their empire requires contextualization. In order to understand their caste system, their pervasive use of necromancy, and their ritualized murders, research into their environment, their limited resources, and their constant warfare against the darkness of the deep sea cannot be neglected. Before judging the laneshi in the dark depths of their world, one question should be contemplated: how would humanity have evolved if the gods had not gifted them with fire?

Despite the surface world’s alien environment, the laneshi can breathe air and walk on land when the need arises. While most encounters are with sailing ships, sometimes the laneshi seek out surface dwellers for matters of death and life.

Whether laneshi twins are identical or fraternal, the second born will always be ritually sacrificed to enhance the first. That leaves the firstborn in charge of their body, acting as the spiritual warden to their second born sibling. However, some necromancers know of rites that can free the second born, allowing their soul to escape their sibling’s body. These freed spirits do not pass on to the next world but become wraiths. Sillia Sasasa lost a duel against a necromancer when the mage cast a spell to free Sillia’s twin. Weak without her twin, the laneshi mystic seeks help to reincorporate her lost spirit. However, the trackers face a moral dilemma. The wraith isn’t evil, it just doesn’t want to go back to Sillia’s spiritual prison. 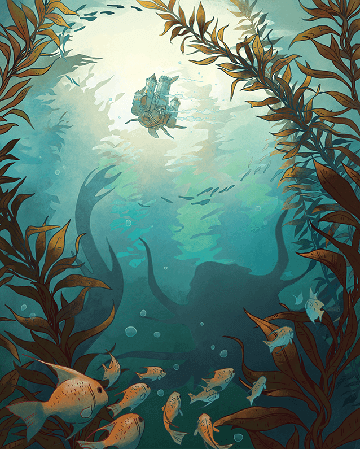 The leadership of the Llana’Shi Empire fear contamination from the surface world. Their number one concern is the dissemination of a heretical concept: the value of all life. In the empire, laneshi find unity in sacrifice and undeath. Yet, one undersea community near the coast of the Charneault Kingdom has taken up a treasonous belief: no more sacrificing their second born twins. Saori Psaie, a laneshi military governor, wants to restore order before the mystics find out and cleanse the region. He is hiring surface dwellers for a gladiator fight to the death to prove to the laneshi that humans do not value life, only coin.

There are cursed among the laneshi: triplets, quadruplets, and more. One body is meant to house a single spirit. A second spirit is a challenge. But three or more spirits is an untenable battle of egos. Selansee wardens the spirits of all three of her identical siblings, each vying for control of her body. In terms of raw necromantic power, few equal Selansee. She has the power to create a solution to her family dilemma, planning to transform herself into a lich while remaking her siblings into her death knights. All she needs are your dead bodies to house her family’s souls.

The Face of Aurelia, a great relic of the dead goddess of protection, is rumored to lie at the bottom of Lake Osea. Yet the Hearthkeepers forbid anyone from entering the lake, creating heretical uncertainty in the minds of some. Stories circulate that the laneshi plan to swim to the bottom of the lake and recover the goddess’ relic themselves, for the purpose of a necromantic resurrection. Is such a blasphemy possible?

Beneath Frostmere, the great frozen lake in Thrull, dwell a splinter group of laneshi called the Iice’Shi. The Iice’Shian laneshi tunnel through the lake’s frozen surface to pull frost giants below the ice to devour. Far more ruthless and violent than other laneshi, they possess a great underwater army of skeletal frost giants held ready to attack the surface world should the flow of giant meat ever run dry.

Within the Bürach Empire exists the criminal Ebon Syndicate, The Shade and the port of Ünterdam, all in the shadow of the great dam, Gräffendam. That ancient structure houses Aquanos, the crop boosting, potion enriching water whose value keeps the lords of Gräffendam wealthy. But what would laneshi bred in the Aquanos be? Super laneshi? A conspiracy to house a force of laneshi within the dam’s Aquanos exists and if it comes to fruition, the lords of that land will have a secret weapon to use against their peasants and the Ebon Syndicate. The Syndicate is looking for outside help to ensure that the laneshi are not allowed into the Aquanos reservoir.

Understanding the laneshi is to know the following: under the ocean, farming, herding, forging, and curing ceramics or food are nearly impossible feats. The laneshi exist in a world of depth, darkness, and death in which buildings of stone and coral are the only permanent structures. Fighting is more likely to be a desperate hand-to-hand struggle without the use of any ranged weaponry. Records are carved into seashells because parchment does not exist in the laneshis world. Despite these deficiencies of environment, the laneshi empire thrives. 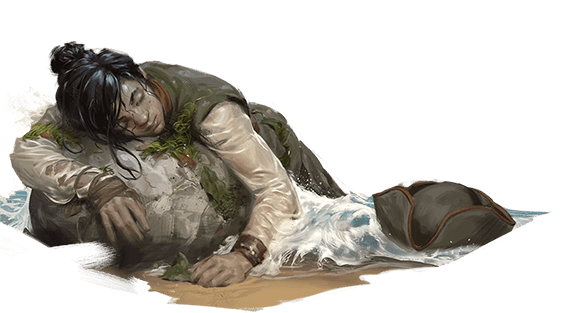 While your character is unique among the laneshi, that does not remove their upbringing. The laneshi are water dwelling people that evolved certain technological and cultural differences far removed from their surface dwelling counterparts. In many ways, the laneshi show their greatest in-game differences in how their classes are visualized. For example, laneshi wizards do not have spellbooks. Any wizard that calls the ocean their home is unlikely to have utilized scrolls, parchment, or inks as none of those resources would survive their environment. Instead, laneshi wizards tend to carry shells with runic carvings. Musical bard laneshi eschew string and wind instruments for obvious reasons. Instead, many laneshi compose water dances that create complex notes as they are performed underwater. To surface dwellers, it sounds like a great deal of water swishing, but to underwater species, these full body song dances can be quite moving. For laneshi druids, it is logical to remove the “no swimming speed” limitation on Wild Shape at 2nd  level. The laneshis familiarity with the creatures of the sea enhances their ability to mimic those forms.

For your Grim Hollow campaign, the next trip to the sea should include a detour to the Llana’Shi Empire. Their undead wonders, bloody sacrifices, and unseen enemies make for memorable adventures for the few surface dwellers that survive them.