How to Keep Your 5e Party on Track Without Railroading
Apr 6, 2022
Blog | GM Advice | Sarah Madsen

In Episode 4 of Fables: Citadel of the Unseen Sun, the characters finally break free of the City Below beneath Ostoya and drag themselves to the surface. With fresh air comes freedom, not only from the horrors beneath, but also to choose what to do and where to go next. The entirety of Soma is spread out before them—and, indeed, the entirety of the open world—and the characters must decide their next course of action.

I adore open worlds, but as a player of 5e and as a GM they can be frustrating if not carefully crafted. There is a delicate balance between freedom to choose and a lack of direction. It can be discouraging as a player when we feel like we’re being railroaded into certain decisions or directions by the GM. At the same time, just being thrown into a world with no idea what to do next can be equally as frustrating.

As a GM, avoiding the feeling of railroading is tricky enough in a home-brew setting. If you’re running a published 5e adventure, it can be trickier still, as you’re limited to what’s on the page. Luckily, you have numerous tools at your disposal to keep your players and their characters on track.

My guide below lays out some of these tools, tips, and tricks. I will endeavor to remain spoiler-free, but this article does reference Episode 4 of Fables: The Citadel of the Unseen Sun (“The Land of Despair”), so fair warning. An NPC is a Guide to the Player Characters

In the first chapter of Episode 4, the PCs come across a second group of adventurers in the subterranean tunnels beneath Ostoya. These can turn out to be enemies or allies, depending on the PCs actions. If they become allies (even temporarily), they can serve as a compass to the characters when they finally reach the surface.

While the NPCs have their own goals and direction, they’re able to give the PCs information about the lay of the land and where they should head from this point in the adventure. They may even invite the characters to travel with them to the nearby town, where the PCs will find items, information, and plot hooks to move them forward.

Utilizing NPC guides can be a good way to move your characters in the direction they need to go. Whether they stumble upon a fellow adventurer in the wilderness, or meet an NPC in one town that’s headed to another and would love a bit of company (and protection) on the road, introducing a social element can hook players in the way a faded wooden road sign might not.

That doesn’t mean you should get rid of that road sign! In fact, the more road signs you can post (literally and metaphoric), the better. Which leads us to the next tool…

One method of prodding your PCs from Point A to Point B is to point multiple plot hooks at the same location. One NPC needs an item delivered, another might have heard interesting rumors surrounding the location, and another may even need an escort or need something investigated.

While one plot hook may not be enough to get the PCs moving, you’ll find they’re far more motivated if they have multiple reasons to head in any given direction… it’s almost as if fate wants them there! And with multiple hooks, you’re far more likely to find one that piques your PCs’ interests.

This also keeps your PCs from getting too settled in one particular spot. Complacency and fear of the unknown can be stumbling blocks, and if the next step of your plot lies in a distant location, keeping the PCs moving forward can be a challenge without multiple carrots and/or sticks prodding them into motion. 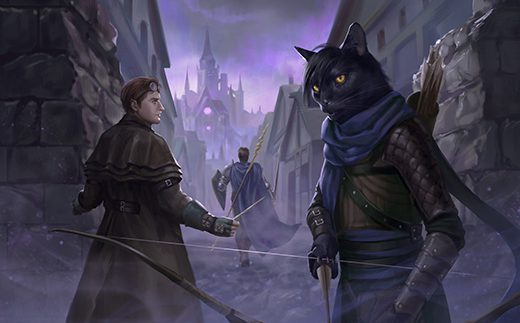 Once you’ve provided your players with several plot hooks—either to one location or many—let the players determine the order of operations. Do they want to explore the ruins in the swamp before heading to the next town, or do they want to hit up the market for more powerful equipment before venturing out into the wilds? Giving your players the flexibility to chart their own path allows them to feel more in control.

For example, in Episode 4: The Lands of Despair, the realm of Soma is vast; the characters have several locations they can travel to, each with unique quests that have the potential to help them in their future endeavors. Each of the towns have quests within them, but also quests that point to the other towns the characters should visit. Generally, they can do this in any order, and the results will more or less be the same.

Whether you wish to have each plot waiting in the background until it receives attention or raise the stakes my escalating plots that are ignored is up to you and the game you are running. However, allowing players to focus on what interests them will keep them motivated to continue moving forward.

Give Your Player Characters a Reason to Care

Unsurprisingly, the more invested the PCs (and players!) are in a particular plot point, the more motivated they are to pursue it, and anything related to it. For some PCs, this means gold or the chance at valuable and interesting loot; for others, the opportunity to do good (or evil) is the biggest draw; and some PCs are primarily motivated by their personal relationships with others. If your player characters are having difficulty connecting with any of the provided plot points, bringing in an additional incentive might be just what you need.

Sometimes it’s something as simple as leveraging a favorite NPC. Do they have a blacksmith they always visit, or a tavern keeper they return to over and over again for gossip? A stolen shipment of the blacksmith’s ore or a missing person from the keeper’s tavern can get the characters moving and invested.

Taking it one step further, NPC companions can up the stakes and the investment level of your PCs immensely. The social and RP potential paired with the risk or reward of adding another person to the party is one of my favorite ways to tug the PCs along toward one goal or push them away from another. The NPC does not have to always agree with the player characters—in fact, it’s often more interesting if they don’t—but having a voice at the table without using your all-powerful (and potentially stifling) GM voice is a refreshing change of pace.

The characters know what they need to do, but they’re not doing it. The Big Bad sits in their castle, waiting for the heroes to come battle, but the heroes are taking their sweet time and losing their direction in the process.

If your player characters have no pressure pushing on them, they may find themselves asking why they need to take another quest or leave the comfort of this warm and cozy inn. While the hero’s call to adventure should be enough to get the PCs of the couch, sometimes they need a bit more of a nudge.

Adding an air of urgency to the situation can rapidly propel the plot forward and get your players to focus on only the things that are vital to their success.

A beloved NPC is kidnapped by the villain and will be ritually sacrificed in three days’ time. One of the characters has been cursed, and they must find a way to undo the spell before the next full moon or it becomes permanent. A message with vital information is en route to the primary antagonist and the PCs must intercept it before it reaches their hands…whatever the flavor, a deadline is a magnificent motivator.

If you’re crafting your own homebrew setting (or your own story within an existing setting), the thought of prepping enough plots to keep a game going can be daunting. What if you spend hours crafting an ideal plot line, only to have your characters get distracted by something else, or ignore it altogether?

To keep yourself from doing hours of unnecessary prep work, the ideal method for an open world setting is crafting seeds, rather than full plots, and allowing your players to chase after what interests them. Seeds should be plot hooks: A rumor of strange creatures seen in a nearby mine, a crumbling tower seen in the distance, a merchant grumbling about bandits on the trade routes. You can create lots of plot hooks quickly and easily, and pepper them into your setting.

Inevitably, your players will decide what interests them the most, and then you can spend your energy developing something you know your PCs are chasing. Otherwise you can find yourself simply hoping the players follow your story or you feel like you need to force them to. Up until now, most of the tools used were all ways to motivate the characters in world and subtly steer them in the direction you want or need them to go. On the out of character meta level, however, session recaps can be a fantastic way to keep players on track and remind them of key details they may have forgotten or overlooked.

Between sessions, taking time to write or talk out of character about what the party’s goals are will keep the players focused (not to mention help you plan your sessions). This is a trick I picked up from my own GM, Alex Rushing, and something I’ve since implemented in my own game.

Sometimes that extra reminder is all a player needs to keep moving in the right direction with purpose. In addition to keeping tabs on plot direction, this is also a good opportunity to check in with your players and make sure they are down with the direction of the campaign!

Be Flexible and Have Fun!

At the end of the session, the biggest thing that matters is that you and your players had a great time. If that means going off-script, so be it! Plots can be tweaked, evil villain’s plans can be altered, and even published campaigns can be adjusted to account for the fun at the table!

Embrace your creativity and your players’ off-the-cuff thinking and run with it. And have fun!