The transformation rules presented in Grim Hollow: The Campaign Guide and Grim Hollow: The Players Guide allow you to add a level of psychological dread and body horror to your campaign as one or more of your player characters transform into something… else.

The introduction of these transformations should always involve discussions and agreement with the affected players. However, for the characters themselves learning that they have become corrupted by something other makes for a terrifying experience.

While some transformations require the individual to aspire to or embrace the change, others are accidents that occur when an adventurer is tainted by some unnatural being. But what happens when you are born something else but just don’t know it yet, and the life you thought you were living is a lie?

Consider the hag: an evil fey that abducts human infants, devours them, and then births a daughter who looks human until it transforms into a hag when in their teens. What if you are hag?

Grim Hollow: The Players Guide does offer a transformation for fey, but it is more focused towards traditional faerie courts or woodland fey. So while you may notice a few similarities with the hag transformation, I’ve tried to offer something more appropriate to a hag.

I have also adopted, in some cases very closely, many of the abilities used by hags found in Grim Hollow: The Monster Grimoire and other 5th Edition rulebooks. For your game, you should feel free to change these, or add even more abilities seen among other types of hags.

Also, while hags are traditionally exclusively female and the lore suggests that they only transform from humans, and do so when they turn thirteen, in a world of magic that allows transformations it seems reasonable to allow the hag transformation for male and non-human characters if the GM and player agree. 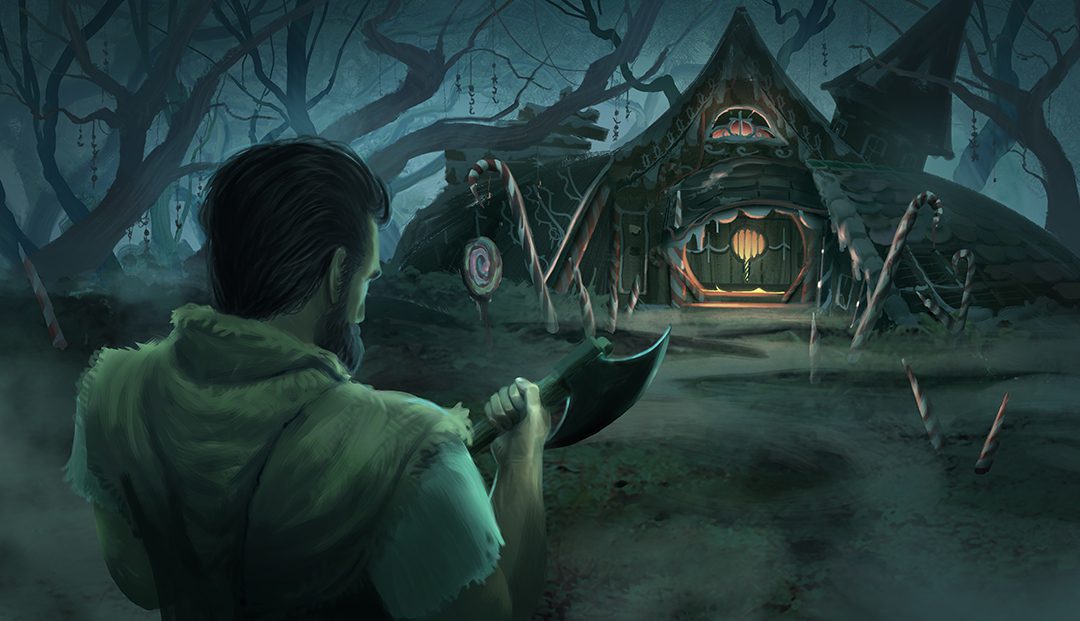 Bubbling comes from the large cauldron as it boils over onto the campfire. The old woman giggles while stirring faster. “Ah, welcome child. I have just finished making supper. Please sit with Grandmother.” Her milky eyes pass over you as she offers a gap-toothed grin.

She passes you a wooden bowl of stew that smells delicious, until you notice it is filled with boiled eyeballs and fingers.

“Eat up before it gets cold!” The hag’s cackling fills the night air of the dark woods.

Cruel and wicked, hags are shadowy fey that take the form of withered crones with an affinity for magic, particular illusions and curses. Their twisted elderly frames disguise a surprising amount of physical strength and power. With a taste for mortal flesh, the wicked fey often adorn themselves in pieces of their victims like grim trophies.

Hags revel in despoiling purity, whether it resides in nature or a mortal’s soul. While those that do not demonstrate respect for a hag can find themselves drifting in a stew or forced into service, hags can be persuaded to forge dark bargains with those who offer polite deference.

Hags share secrets with their fellow sisters and can live for centuries, meaning that they are repositories for dark knowledge and forgotten lore. 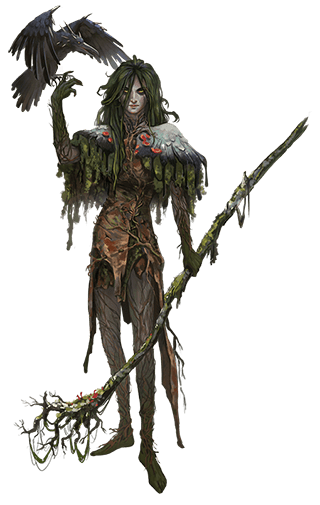 Becoming a hag usually requires that the character is the direct, though often unknowing, offspring of another hag. The spawn of a hag may display personality quirks like a predilection for playing with the dead or torturing animals, but otherwise appears completely normal until their transformation.

Much rarer are those that seek out a hag with the intention of transforming. Most mortals are simply killed, but very occasionally a hag sees potential in the humanoid’s spiteful soul. Or perhaps they have lost a daughter or sister and wish to add a new ally to their coven. In these cases, and only if the hag is powerful enough, the fey might offer to perform a ritual to awaken the change for a price.

A hag has the following transformation features:

Roleplay: You must have been unknowingly born a hag, or you must have struck a dark bargain with a hag while exchanging something of dear sentimental value for the ritual to begin your transformation.

Some of your abilities require your target to make a saving throw to resist their effects. The saving throw DC is calculated as follows:

Transformation Save DC = 8 + your proficiency bonus + your Charisma modifier

The following are examples of possible level milestones for the Hag:

Your Strength score increases by 2 and your Charisma score increases by 1. An ability score cannot be increased beyond 16 this way. You also become a fey in addition to any other creature types you are. Spells that affect humanoids still affect you. However, you’re immune to effects that only affect fey of a specific CR.

When you gain this ability, you must also choose an affinity with one type of hag, likely the same type as your hag mother or patron. Choose one of the following:

Green Hag: Your fingernails grow hard and sharp giving you two claws that function as natural melee weapons that use your Strength ability modifier. These claws do 1d6 damage.

Red Hag: You learn how to sway others to your will and know the Charm Person spell. You can cast this spell once with this boon and regain the ability to do so when you finish a long rest. Charisma is your spellcasting ability for this spell.

Sea Hag: You become amphibious and can breathe both air and water. You also gain a swim speed equal to your walking speed.

You start to adopt your hag visage, manifesting faint wrinkles, age spots, thinning hair, and pointed ears. You gain Darkvision (60 ft.) if you do not already have it. You add Sylvan to your list of known languages.

Your body and soul are bound to one of the faerie realms. You have disadvantage on death saving throws as the realm attempts to pull you back to it. If you would be killed, your soul is taken back to a plane of existence of the GM’s choice. This plane is your new home, and you become an NPC under the GM’s control. If you are in the faerie realm responsible for your transformation, this flaw has no effect.

The innate magic of your hag blood begins to manifest, and you gain the ability to cast a small number of spells, requiring no material components.

You know the dancing lights, minor illusion, and vicious mockery cantrips. You can also cast the fog cloud and misty step spells once each and regain the ability to do so when you finish a long rest. Charisma is your spellcasting ability for these innate cantrips and spells. 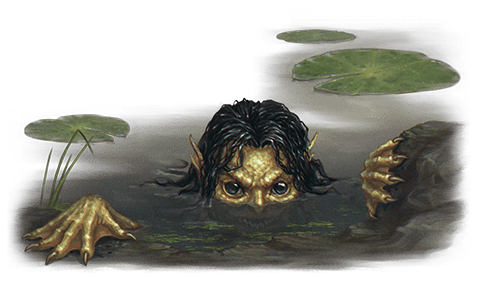 Any humanoid that starts its turn within 30 feet of you and can see your true form must make a Wisdom saving throw. On a failed save, the creature is frightened for 1 minute. A creature can repeat the saving throw at the end of each of its turns, with disadvantage if you are within line of sight, ending the effect on itself on a success. If a creature’s saving throw is successful or the effect ends for it, the creature is immune to your Horrific Appearance for the next 24 hours.

Unless the target is surprised or the revelation of your true form is sudden, the target can avert its eyes and avoid making the initial saving throw. Until the start of its next turn, a creature that averts its eyes has disadvantage on attack rolls against you.

(Green or Sea Hags only)

You cover yourself and anything you wear or carry with a magical illusion that makes you look like an ugly humanoid of your general size and shape. The effect ends if you take a bonus action to end it or if you die. The illusion does not hold up to physical inspection and touching you reveals the illusion immediately. A close visual inspection sees through the illusion if the creature succeeds on an Intelligence (Investigation) check against your transformation save DC.

Green Hag: You wither or bloat as your body struggles to deal with the ravages of age. Your hair becomes white and several feet in length. Your skin becomes green and covered in warts and boils.

Red Hag: Your eyes have turned entirely red, and your pupils are narrow like a cat’s. Your skin becomes blood red.

Sea Hag: You have slimy scales and the pallid skin of a dead fish that sags from your emaciated body. Your hair resembles seaweed, and your eyes are glassy.

At 3rd level, you can pick one of the following Transformation Boons or pick a boon from a lower level that you meet the prerequisites for. In addition, you also gain this level’s Transformation Flaw.

You magically turn invisible until you attack, cast a spell, or until your concentration ends (as if concentrating on a spell). While invisible, you leave no physical evidence of your passage. Once you use this ability, you can’t do so again until you finish a short or long rest.

You gain mastery over your voice allowing you to cast speak with animals at will. You can also mimic animal sounds and humanoid voices. A creature that hears the sounds can tell they are imitations with a successful Wisdom (Insight) check against your transformation save DC. 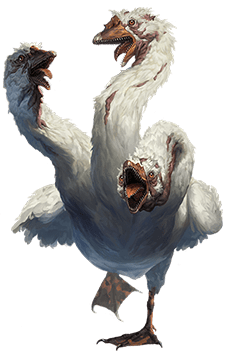 Unspoiled, pure things cause you physical pain to witness. The hug of a child, a loyal dog laying in its head upon a sick man’s lap, a work of religious art devoted to a seraph, a baby’s laughter; these things make you physically ill.

When you are in the presence of a pure act or object (GM’s discretion) you are wracked with pain and while you can see the cause of your pain, you suffer 1d6 psychic damage at the start of each of your turns and cannot use any of your transformation boons.

In addition, you learn the ritual to create a gasdra (Grim Hollow: The Monster Grimoire). You cannot invoke the ritual again while a gasdra you created still lives.

You can pick one of the following Transformation Boons or pick a boon from a lower level that you meet the prerequisites for. In addition, you also gain this level’s Transformation Flaw.

Your visage is so horrific, that it may kill a mortal. A creature that you can see within 30 feet of you must succeed on a Wisdom saving throw. If successful, the creature is frightened until the end of its next turn. If the target fails the saving throw, it drops to 0 hit points.

Constructs, oozes, undead, creatures with legendary actions, or any creature immune to fear is unaffected by your death glare. Once you have used this ability, you cannot use it again until you complete a short or long rest.

You learn one greater curse (Chapter 3, Grim Hollow: The Campaign Guide). You always have it prepared, and it doesn’t count against the number of spells you can prepare each day.

You are hard to kill. You gain resistance to cold and necrotic damage. In addition, when you make a saving throw against a spell you can use a reaction to gain advantage on the roll. Once you use this reaction, you can’t do so again until you finish a short or long rest.

The evil in your soul burdens so heavily that you cannot stand pure souls and this drives you to feast upon the innocent. If you go more than 24 hours without consuming a good aligned humanoid, you are greatly weakened and crazed with hunger.