5th Edition Game Masters looking to add a little adventure for date night this Valentine’s Day need only draw inspiration from the romantic tales made famous by the Brothers Grimm. Love stories come in all forms and whether it’s a duet-style adventure with one GM and one player or a group made up of romantic partners, there are plenty of tales as old as time that can be reworked into a 5e one-shot or as part of a campaign.

The easiest example is taking some well-known classic Western fairytales and altering the characters, setting, points of view, or plots. In many cases, these tales have been cleaned up for a modern audience to reflect more family-friendly sensibilities. Of course, the original Grimm versions were grisly and often contained disturbing details. Depending on your players, you could lean into these gruesome origins or maintain a more romantic atmosphere. Fairy tale adventures take place in familiar settings like dark forests, expansive oceans, or sprawling manors that can easily be dropped into most campaign settings. You can place these types of adventures into a campaign as a surprise or run them as a special one-shot. The key to keeping your players on their toes is keeping some of the more familiar elements of the tale and then mixing things up to defy expectations.

Here we’ll be looking at three specific examples to get you started: Beauty and the Beast, The Little Mermaid, and Snow White.

Chased by dire wolves, the characters stumble upon a castle and seek refuge. Inside, they discover animated objects and a lurking presence.

A merrow king issues a bounty to find the culprit who he believes kidnapped his youngest daughter.

With their queen under a powerful sleep spell and her dwarven guard turned to stone, a royal huntsman seeks adventurers to overthrow a wicked queen in a neighboring realm and put an end to the magical curse.

Hired by a council of supernatural overseers, the adventurers are tasked with investigating suspicious activity in three neighboring realms. The above stories can be connected through a coven of villainous spellcasters who are wreaking havoc in the fairytale world. 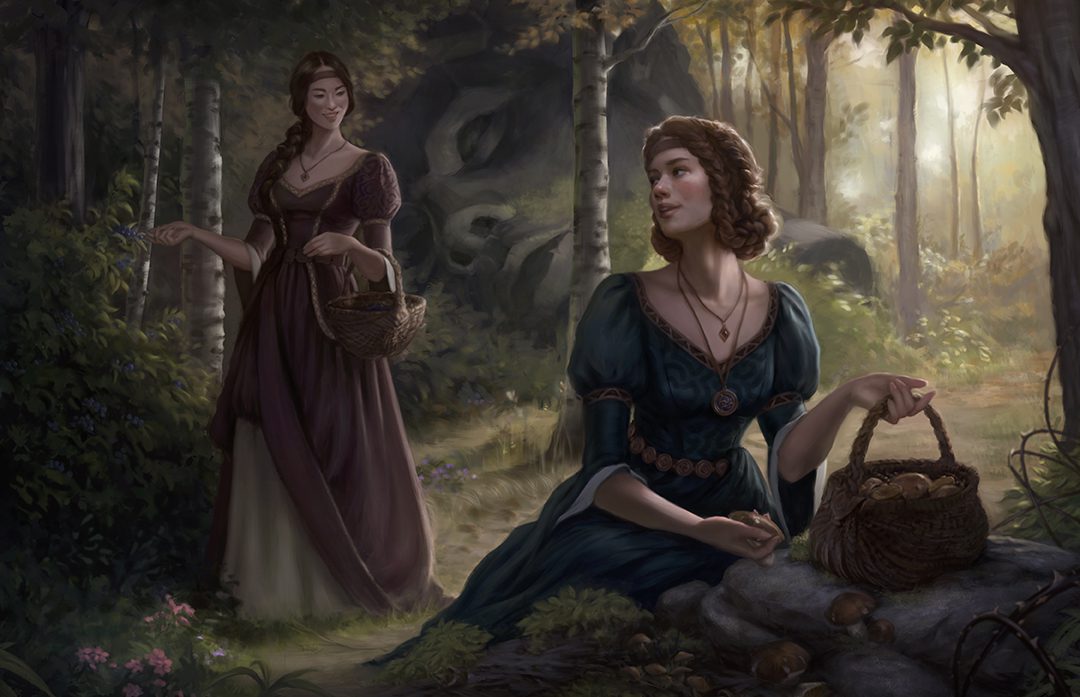 Some monsters are not what they seem. The Beast is a prince cursed for his selfishness. Whereas other stories have villains that are less obvious. In the original telling of The Little Mermaid, she is her own worst enemy. Whatever the case may be, when turning a fairytale into an adventure there are plenty of opportunities not just for combat but also social interaction and exploration.

One way to make things interesting is by adding some surprises in the monster stat blocks that your players may not be expecting.

In this tale as old as time, there are several ways to alter the details of the story. Imagine that bookish Beauty delved into magical tomes to become a powerful wizard. In this scenario, she could be the enchantress who cursed the Beast herself or has taken pity upon him and is staying in his castle to protect him from outsiders.

To create Beauty, start by using the mage stat block. Add innate spellcasting so she can cast at will find familiar, giving her an awakened shrub familiar in the form of a rose bush. And because librarians like quiet she can cast silence (2/day).

It makes sense to give her Speak with Plants and Beasts. Beauty can communicate with beasts and plants as if they shared a language. Beauty also has the following wizard spells prepared:

What we have in Beauty is a spellcaster who uses her magic to charm or dissuade but can cause damage if needed. She also has the means of magically retreating when things get… hairy. After all, her partner is a ferocious monster more capable of causing physical damage. For the Beast, use the wereboar in its hybrid form as the stat block. Due to the nature of his curse, drop Shapechanger and give him Immutable Form. The Beast is immune to any spell or effect that would alter its hybrid form.

What makes The Beast exceptional is his following ability.

Terrifying Roar. The Beast roars magically. Every enemy within 120 feet of the Beast that can hear it must succeed on a DC 13 Wisdom saving throw or be frightened until the end of the Beast’s next turn or until the Beast is incapacitated. A frightened target that starts its turn within 30 feet of the Beast must use all its movement on that turn to get as far from the Beast as possible, must finish the move before taking an action, and must take the most direct route, even if hazards lie that way. A target that successfully saves is immune to the roaring of the Beast for the next 24 hours.

Within the castle itself, characters meet animated objects. These can be cursed adventurers who stumbled upon the castle in the past and who now seek help themselves. A rose of polymorph curses the inhabitants of the castle. With each hour the characters remain on the premises, they begin to transform. Choose from a variety of constructs to represent the animated objects. The goal of the adventure is to destroy the rose and free the inhabitants from Beauty’s curse.

In this seafaring and underwater adventure, we flip the script a little. Instead of The Little Mermaid falling for a land-dwelling prince, consider the strained relationship between two oceanic realms—merfolk and merrow—and use that as the basis for a Romeo & Juliet type of romance.

The Little Mermaid uses the merrow stat block with one added ability:

Luring Song. The mermaid sings a magical melody. Every creature within 300 feet of the mermaid that can hear the song must succeed on a DC 11 Wisdom saving throw or be charmed until the song ends. The mermaid must take a bonus action on her subsequent turns to continue singing. She can stop singing at any time. The song ends if the mermaid is incapacitated. While charmed by the mermaid, a target is incapacitated. If the charmed target is more than 5 feet away from the mermaid, the target must move on its turn toward the mermaid by the most direct route, trying to get within 5 feet. It doesn’t avoid opportunity attacks, but before moving into damaging terrain, such as lava or a pit, and whenever it takes damage from a source other than the mermaid, the target can repeat the saving throw. A charmed target can also repeat the saving throw at the end of each of its turns. If the saving throw is successful, the effect ends on it. A target that successfully saves is immune to the mermaid’s song for the next 24 hours.

The Little Mermaid has fallen in love with a merfolk prince or princess. To change her form into a merfolk so she can blend in, she’s made a deal with a sea witch. As with all hag bargains, it comes with an unexpected price. Although she is polymorphed into a merfolk she has no voice. The fine print on the bargain is that if her romantic interest falls in love with another, the Little Mermaid turns into sea foam. The sea witch (use sea hag coven variant stat block) is naturally behind the conflict and even tries to woo the romantic interest of the Little Mermaid. She has stolen the mermaid’s voice using a magical conch shell.

For the sea witch, rather than hate all things beautiful she is covetous and applies merfolk beauty standards upon herself. Alter Illusory Appearance to reflect that. While in possession of the conch shell, she also has the Little Mermaid’s Luring Song ability.

Then, replace Death Glare with the following.

Lightning Strike (Recharge 5–6). The witch hurls a magical lightning bolt at a point she can see within 300 feet of her. Each creature within 10 feet of that point must make a DC 13 Dexterity saving throw, taking 21 (4d8 + 3) lightning damage on a failed save, or half as much damage on a successful one.

Depending on the level of the characters, you can always add a few underwater minions to keep things interesting, or use a Laneshi Necromancer  from Grim Hollow: The Monster Grimoire for a higher CR version of the sea witch.

What if Snow White was a queen in her own right? A fair ruler in more than one way, and the envy of a monarch in a neighboring realm. In this scenario, a wicked wood divides two kingdoms. On the other side, an Evil Queen has risen to power and covets dominion over both realms.

Adventurers in this scenario are hired by the royal huntsman to venture into those lands to find a cure for Snow White who has bitten into an apple of eternal sleep. With her dwarven guard also turned to stone, characters are tasked with traversing the wicked wood into the neighboring nation.

During the exploration phase of their journey, characters face terrible forest creatures such as corrupted awakened trees. Modify this stat block to include:

Entangling Roots (Recharge 5–6). Grasping roots sprout in a 15-foot radius centered on the tree, withering away after 1 minute. For the duration, that area is difficult terrain for none-plant creatures. In addition, each creature of the tree’s choice in that area when the roots appear must succeed on a DC 14 Strength saving throw or become restrained. A creature can use its action to make a DC 14 Strength check, freeing itself or another entangled creature within reach on a success.

Other minions are werewolves which may tip off the adventurers to the true nature of the Evil Queen who uses the stat block of a lamia. Replace Intoxicating Touch with the following instead.

Evil Laugh. When the queen laughs, she scars the minds of other nearby creatures. Each creature within 10 feet of the queen must succeed on a DC 13 Wisdom saving throw or take 5 (1d4 + 3) psychic damage. The lamia took the throne after the real queen failed to quell the monster’s rise to power.

Her magic mirror could be a mirror that can cast scrying, which also has a personality. Or it could act like a mirror of life trapping and house the imprisoned soul of the real queen of this realm. 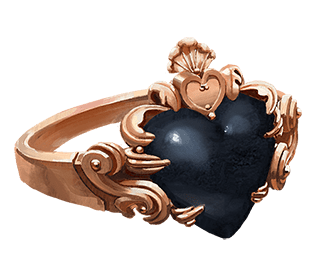 Once the characters have dealt with the evil wizard and her pet beast, they could take over the no longer haunted castle and live happily ever after. They could also continue their seafaring adventures, with a favor owed from a merrow princess and her kingdom. Or they could pledge allegiance to the fairest of them all, Snow White, able to call upon her dwarven retinue for aid.

There is no shortage of fairytales from which to draw inspiration for more romantic adventures, whether it’s during Valentine’s Day or any other time of the year.