Have you ever wanted to play a tabletop roleplaying game that requires three or more players, but you’re unable to coordinate a time that works for all your friends? Or are you searching for a fun date night idea or a 5e adventure to play with just your housemate? Never fear my friend, duet-style play is here to save the day!

Duet-style play is a unique way of playing tabletop roleplaying games that requires only one game master and one player. This form of gameplay is getting lots of attention—even Wizards of the Coast implemented this style of gameplay into 5th Edition by introducing detailed side-kick rules in Tasha’s Caldron of Everything and publishing an adventure, Dragon of Icespire Peak, compatible with duet-style gameplay. 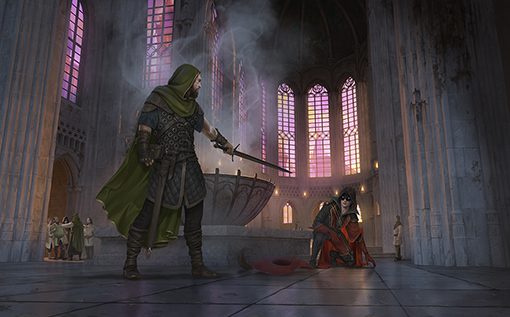 This article highlights the unique aspects of duet-style gameplay for game masters to consider and examines the inherent differences between duet-style adventures and traditional-style adventures which require a group of several players. I’ll be sharing game design insights gathered from my own experiences designing premier duet-style adventures, as well as feedback from over 40 GMs that helped me play-test these scenarios.

Before continuing, I’d like to clarify that I believe all GMs are, by definition, game designers. The experiences I share from a game design perspective are specifically meant for GMs since they design encounters, plot hooks, story arcs, and more, even if they never publish their content!

Ready yourself, grab your wand, bow, or ax, and join me on this adventure exploring duet-style gameplay. If you brave the journey, by the end of this article, you’ll be ready to jump in and run or design your very own duet-style adventure! Hurry now, adventure awaits us, onward!

Understanding these design differences help GMs design immersive and memorable adventures for their player in a duet-style adventure.

The Adventure is Specific to One Player-Character

In traditional-style adventures, the number of players (not including the game master) ranges between 2-7 players or more. This results in the adventure and its story accommodating multiple characters, affording each player an opportunity in the adventure for their character to shine and occupy the spotlight.

In a duet-style adventure, the narrative and story are tightly knit and directly centered on the one player’s character. Everything is about that character’s journey. They are the center of the adventure’s story, and this makes an enormous narrative difference. Recognizing this change equips game masters with the context needed to design a story arc or plot solely around one character with immense specificity.

For instance, the importance of knowing what type of character your player is going to create and bring to a game session is highly important. You can examine their backstory, character race, and class to incorporate those aspects directly into the narrative of the adventure. When a single character is the focus of the story, the GM tailors the adventure encounters around the character’s class, strengths, and weaknesses. 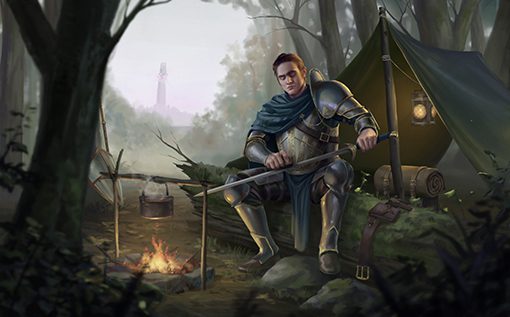 For example, a character that is a bard is likely going to thrive in an adventure with many social encounters. By comparison, a fighter will excel much more in combat heavy adventures, while a ranger shines in story about exploration.

Unlike traditional-style adventures, the duet-style adventure is designed specifically around a single-player experience. Their character is the main protagonist in every scene and is challenged by specific dilemmas core to their character’s bonds, flaws, ideals, and personality traits.

Additionally, in duet-style play, GMs need to pay attention to their player’s particular playstyle. If the GM knows the player personally, this is an opportunity to bring out themes and scenarios that player enjoys, especially when it comes to interactions with non-player characters (NPC).

Now that we’ve covered how specifically tailored duet-style adventures are around the player and their character, let’s discuss pacing.

Being a GM is a tough job. It takes a lot out of anyone who plans an entire session, plays every NPC, and controls multiple creatures in combat. It’s tough! When it comes to duet-style adventures, gameplay moves at a rapid pace compared to traditional-style adventures. The main reason for this is due to the lack of other players at the table.

When a character needs to make a decision, the outcome is entirely up to them. There is no group to confer with or other characters with differing goals and agendas to convince. While this might seem like a minor nuance, when implemented, the story and plot move quickly since all deliberations are cut from gameplay. Those moments where the game master sits back and watches players debate the next course of action is absent in duet-style adventures and causes the pace of the story and plot to rapidly speed up.

As a final thought on pacing, GMs trying duet-style adventures for the first time might consider running a two-hour session to see how it feels. In addition to the faster pacing, the amount of constant roleplaying and interaction between the GM and player is much greater. This is both extremely rewarding but potentially exhausting if you attempt to run a common four to eight-hour game normally associated with traditional 5e sessions.

Pace yourself and you’ll find duet-style adventures allow you to achieve more at the game table in a shorter span of time. However, there’s no need to rush through your story or prepared content. Become comfortable with the pace of duet-style adventures, then expand your session lengths as you become familiar with this new style of play.

There is Constant Game Master and Player Interaction

As we pivot to GM and player interactions, visualize both individuals sitting together at the game table getting ready for the fun to begin! Here is where duet-style adventures truly showcase their uniqueness, as the GM and player are in a state of constant engagement with each other. Whether the GM is roleplaying NPC allies, villains, or passerby commoners on the road of adventure, there is never a dull moment between the GM and the player.

The added benefit of this depth of interaction is the ease with which a GM can introduce new players to the tabletop roleplaying hobby. The GM can introduce new ideas or mechanics without interrupting the game or causing anxiety on the player’s behalf for halting the game to ask questions they might be hesitant to ask in front of others. The player has the full attention of the GM and this is a perfect opportunity to introduce a player to a new system they’ve never experienced before within a safe and inviting atmosphere.

Alternatively, there’s no better way for an experienced GM to introduce a player to the magical world of game mastering by flipping the roles and mentoring a first-time GM through running a low stress duet-style adventure. This way the experienced GM can become the player and the player becomes the GM, allowing both to walk through an adventure together without the added pressure of an entire group of players being involved. This has the added bonus of making traditional-style adventures easier to manage in terms of pacing and interaction once a new GM transitions to that form of gameplay.

Creating and Running a Duet-Style Adventure

Together, we are going to walk through some basic steps that’ll help you create a memorable two-hour experience for yourself as the game master and the lucky player of your choice.

Find a player and determine what type of character they’ll be playing during the session. Record their race, class, and preferred playstyle so you can envision the adventure designed around that character.

For example, if they choose a paladin on a quest for vengeance, your plot and adventure hooks might be totally different than a sorcerer seeking their powerful ancestor to learn how to master the secrets of their arcane heritage.

This first step can double as a session 0 as you discuss the content of the adventure and what the game master and player can expect from each other. For information on what your session 0 might look like, check out Running an Evil Campaign: Session 0 by Celeste Conowitch. Get to work planning a two-hour duet-adventure split into three parts, with each part comprised of 40 minutes of content. The three parts of the adventure follow a classic story structure and include the setup, confrontation, and resolution.

A strong method of kicking off a duet-style adventure is in media res where the character begins the adventure right in the middle of a scene. This allows you to skip unnecessary haggling over going on a quest and get right to the action! The adventure hook is contained in the setup and leads to part two where the character confronts the antagonist of the plot which then leads to the climax and resolution of the story.

Below is an example of a duet-style adventure following this three-part story structure:

The character begins the adventure in media res having stumbled across a ransacked royal carriage on a solitary road. A dying guard from the carriage serves as the quest giver. They inform the character that they were attacked by a group of bandits who kidnapped a member of the royal family. The royal family member had been sent on a diplomatic mission to prevent the outbreak of war with a neighboring kingdom.

The character must attempt to track down the bandits in a nearby forest.

The character discovers the bandits’ camp in the forest and learns that they work for a member of the royal court. The bandits’ employer hoped to prevent the diplomatic mission from succeeding thus sparking a war with the neighboring kingdom in an attempt to see the royal family dethroned.

The character confronts the leader of the bandits and rescues the royal family member. Together, they can continue the diplomatic mission or return home to oust the mysterious member of the royal court attempting to ignite a war and dethrone the royal family.

This cliffhanger resolves the adventure and leaves the door open for continued adventures and quests!

During each part of the adventure, include one ability check or obstacle that relies on one of the player-character’s class features. This adds the extra level of immersion and specificity duet-style adventures offer.

For example, if the character is a ranger, incorporate the creature type from their favored enemy class feature. Now they can have advantage on Wisdom (Survival) checks to track their favored enemies and Intelligence checks to recall information about them.

You’ll see immense satisfaction on the player’s face as they discover the adventure truly is all about highlighting how awesome and heroic their character is!

Step 4. Have Fun Playing the Game

Run your duet-style adventure and have fun! Pro-Tip: Don’t forget to bring your favorite snacks and drinks!

With this knowledge in hand, you’re ready to go forth to create, run, or play in your very own duet-style adventures! Scheduling conflicts and large group commitments won’t be an obstacle any longer to playing your favorite 5e adventures.

Whether you’re a veteran or new to TTRPGs as a GM or player, the duet-style adventures offer you a great opportunity to immerse yourself in a unique playstyle that puts the story’s attention directly on the character.

You can follow Anthony Joyce-Rivera on Twitter @Thrawn589 or visit his website Anthony Dreams to find all his work including his published duet-style adventures The Blood Hunter and The Tenacious Bard vs. Orcus.